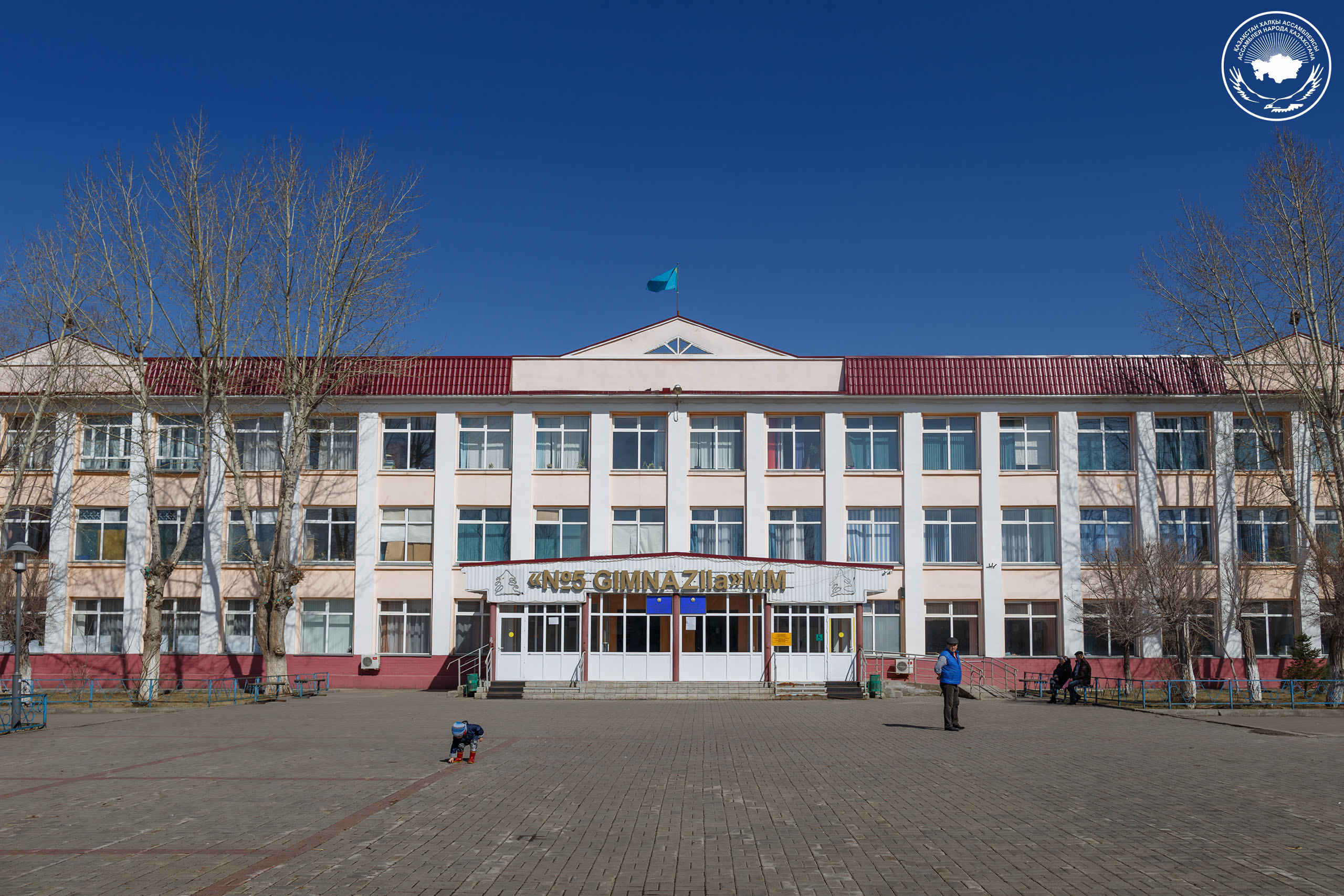 There are 22 ethno-cultural associations in the Assembly of People of Kazakhstan in the capital, which take an active part in the life of the city. One of the cultural centers is the public association "Polacy", which marks its 20th anniversary in September 2019. On the eve of the anniversary, we decided to write about the Polish Sunday school under the ethno-cultural center.

The Polish Sunday School was organized in 2006 on the basis of the Linguistic Gymnasium No. 5 under the auspices of Polacy Public Association, the Assembly of people of Kazakhstan and Municipal Department of Education. The school's activities and educational process are primarily focused on the study of the Polish language, culture, history, literature and geography of Poland. 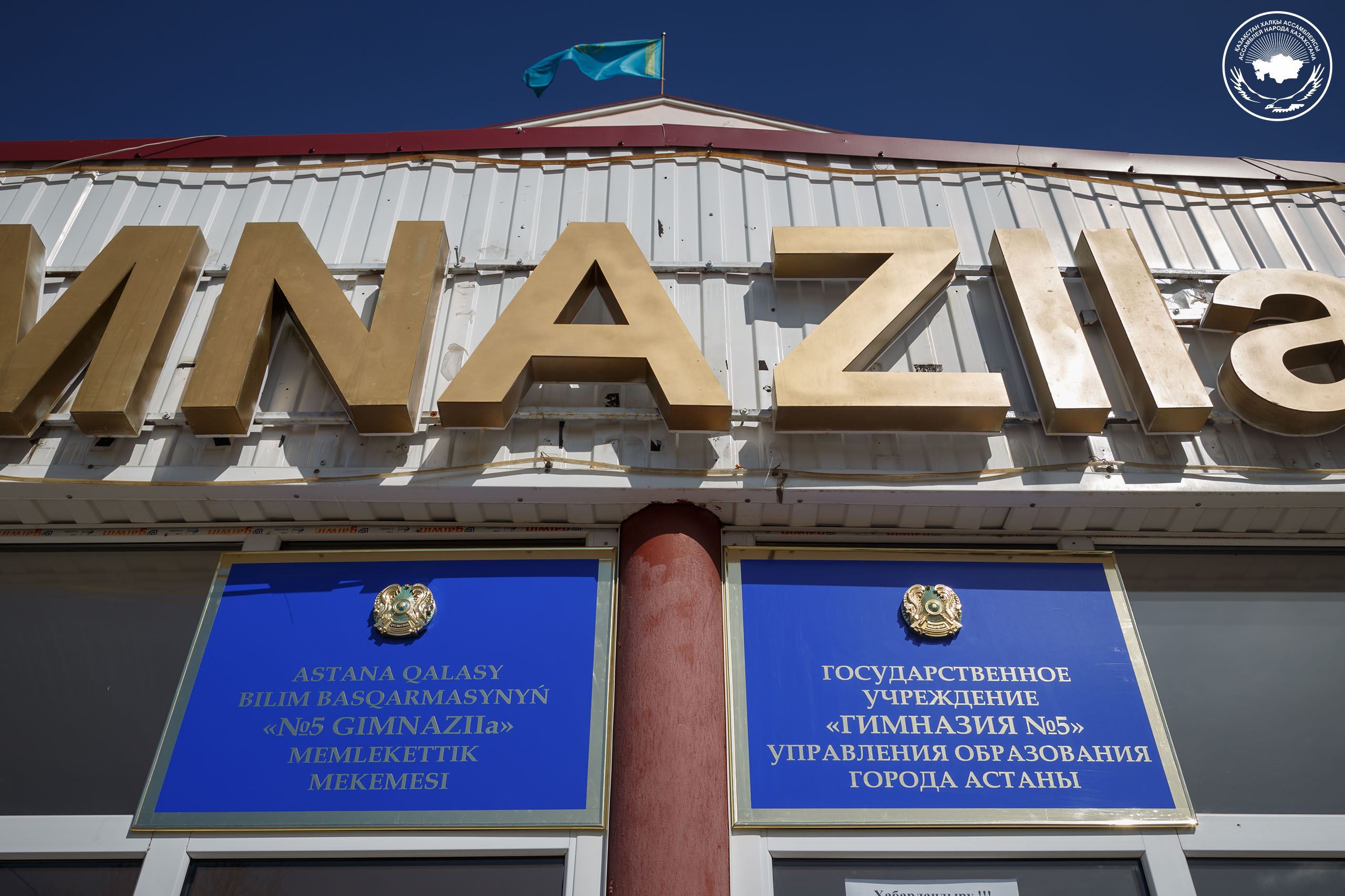 The Sunday classroom is named after the Polish composer Frederic Chopin. 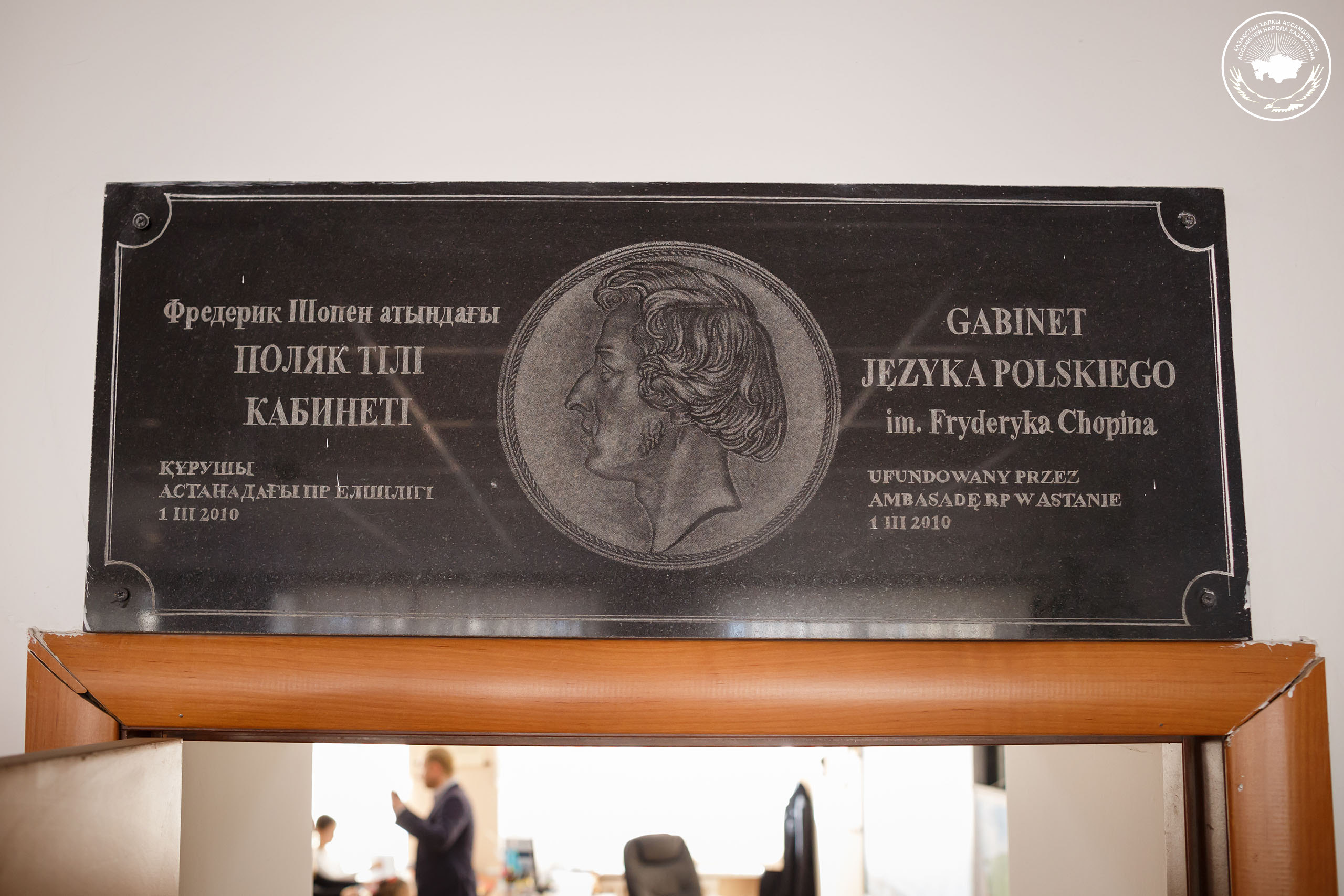 The school is equipped with methodological literature, office equipment and technical equipment. In providing all the necessary school is supported by the Embassy of Poland in the Republic of Kazakhstan, with which the Sunday school actively cooperates, and their representatives are frequent guests at the events of the institution. 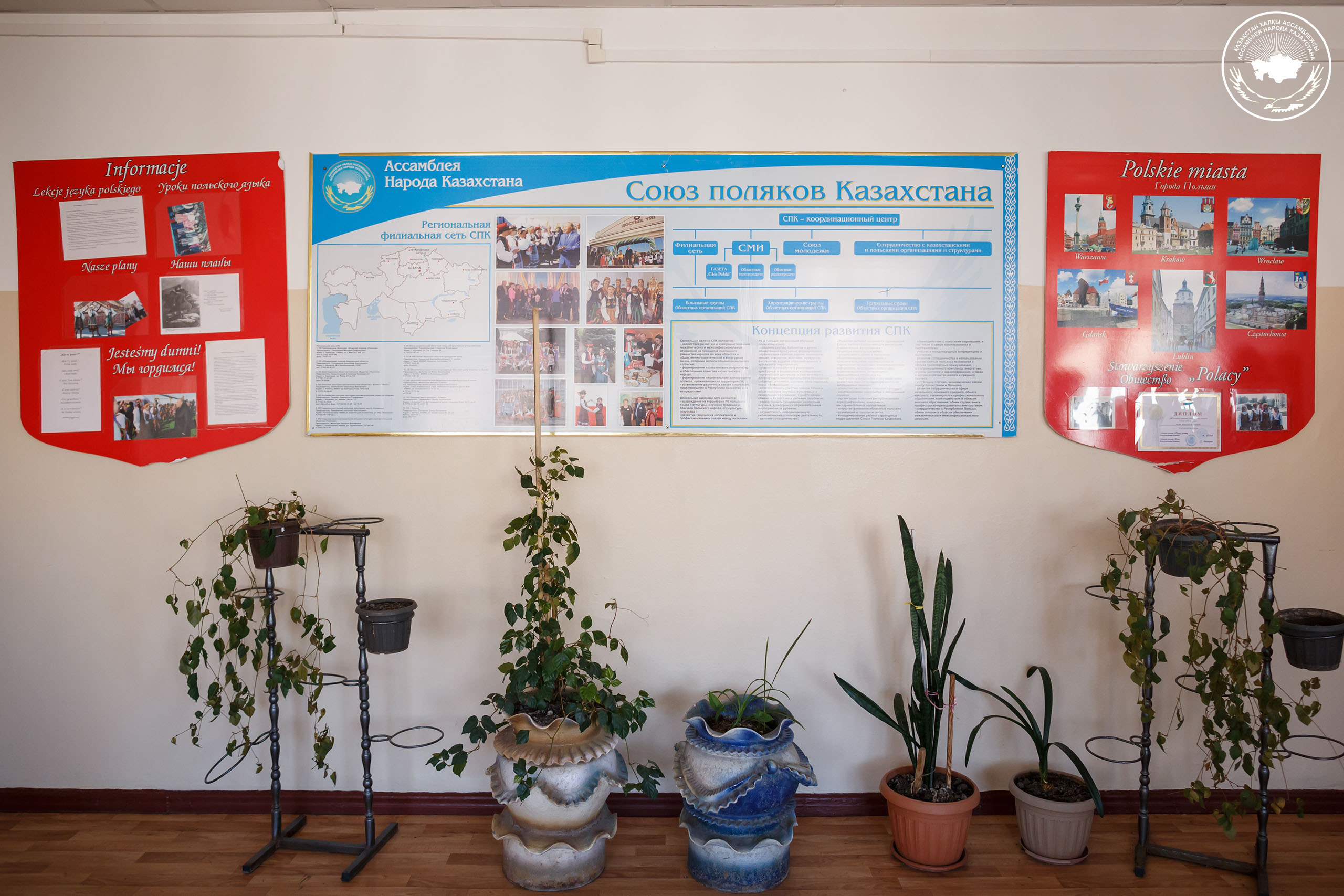 Despite the fact that classes are held on Sunday, children have the opportunity to study throughout the week. 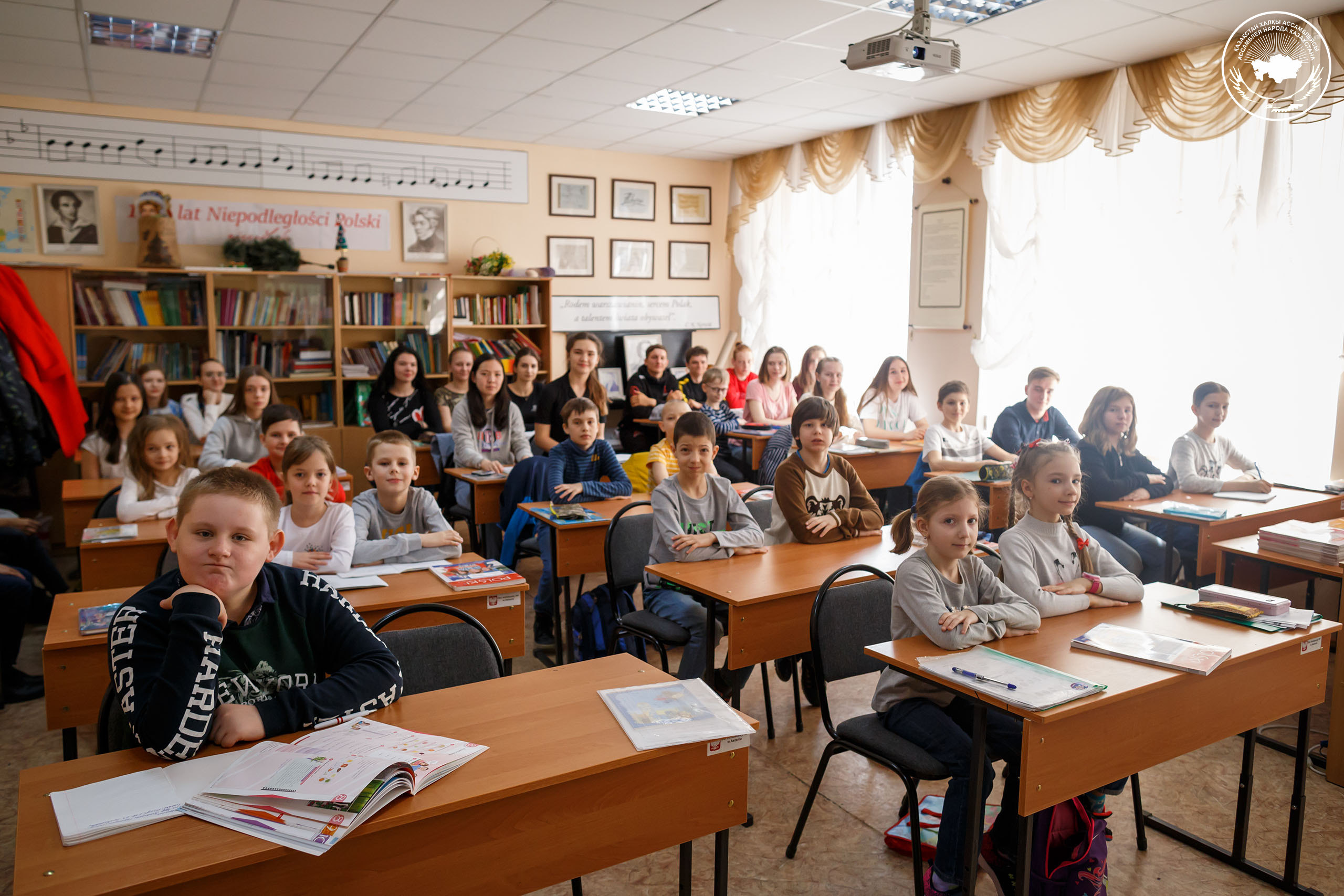 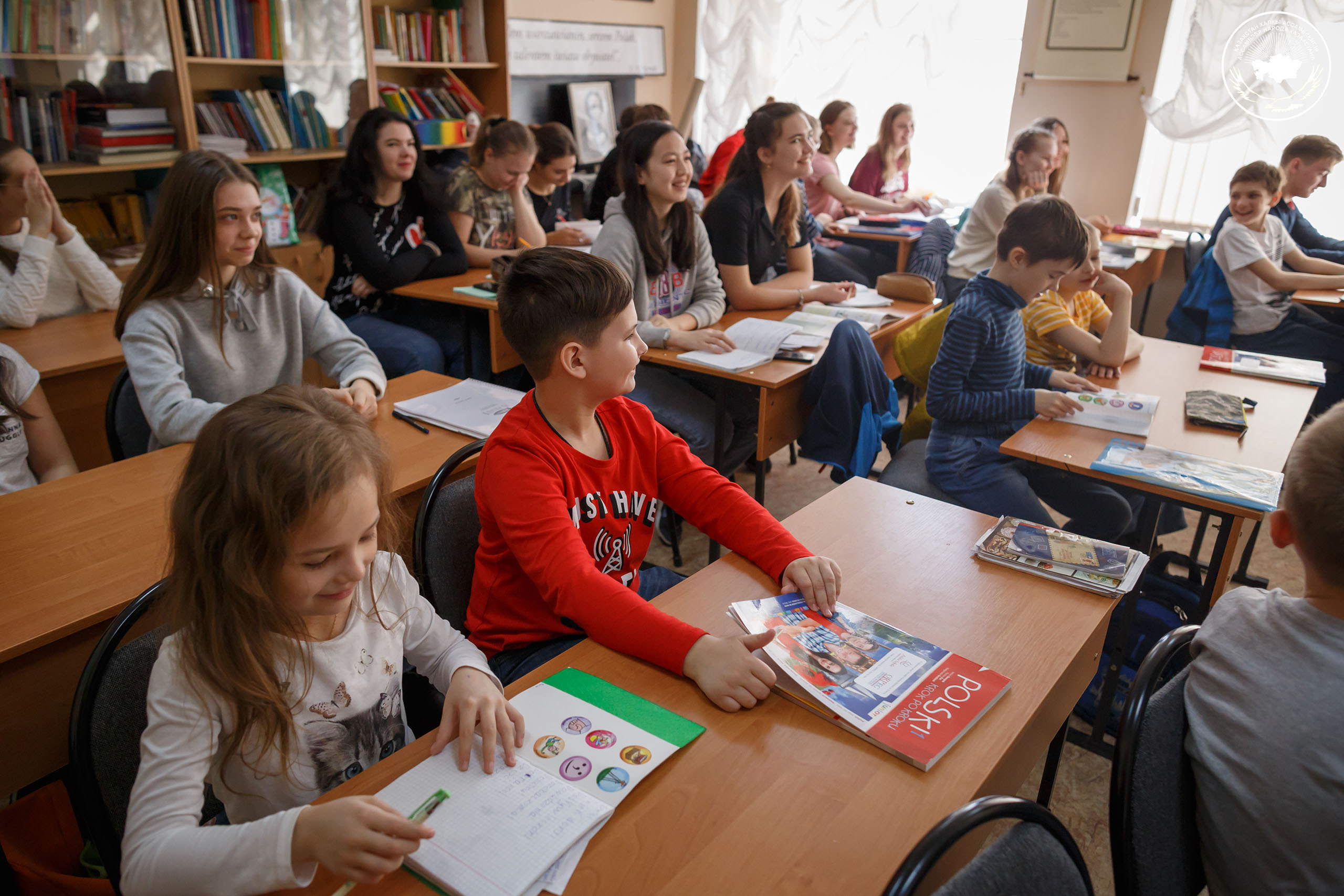 It is worth noting that the children not only attend classes at school, but also go to festivals in Poland - they were in Bukovina, in Krakow. 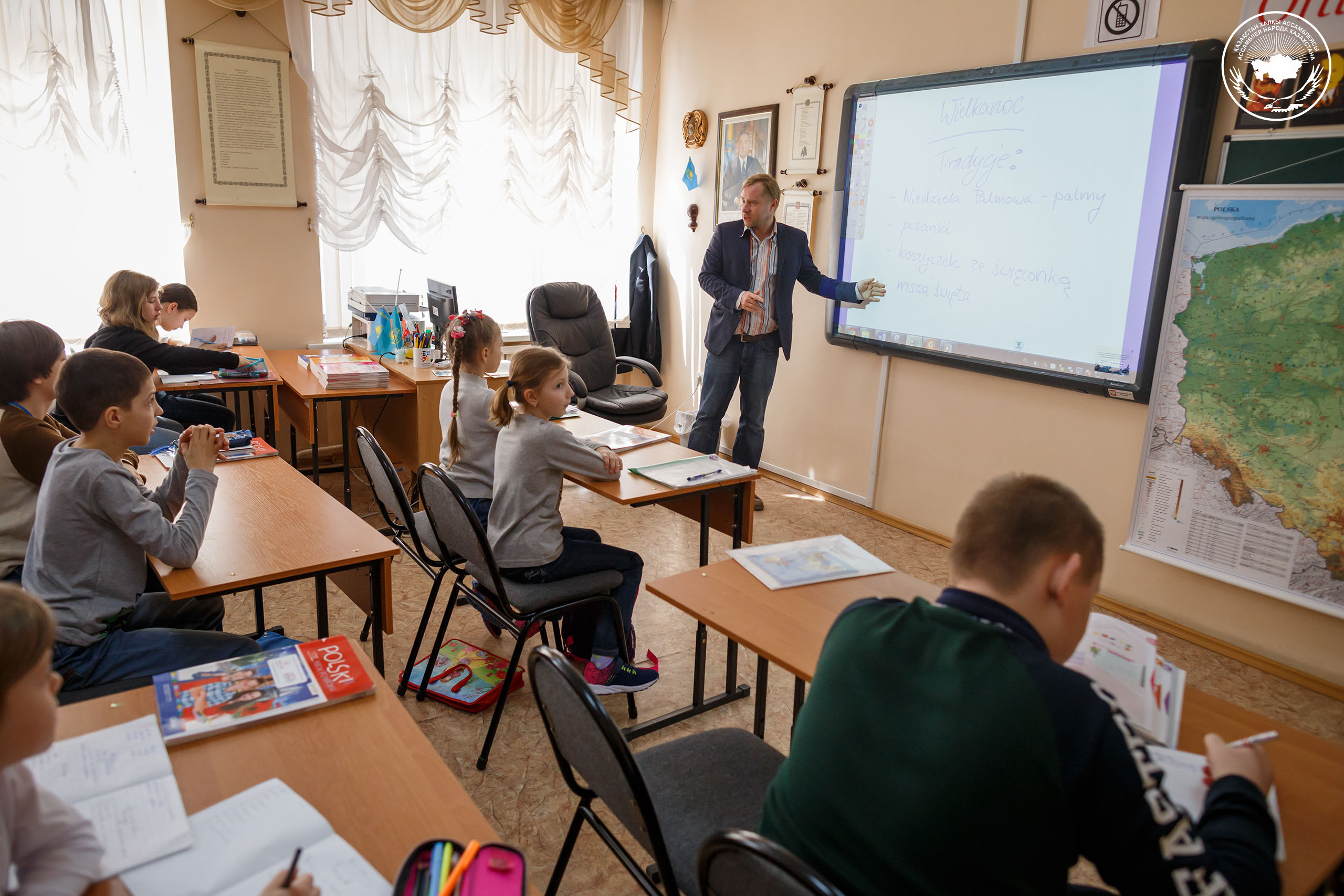 Polish is taught at school, lessons are given by Polish native speaker, Master of Polish Philology, Mr. Daniel Zatorski. He has been teaching Polish language, history and culture for the third year already. In total, 25 native Polish language teachers from Poland come to Kazakhstan. They help Polacy Association to revive the culture, customs and traditions of the Polish people. 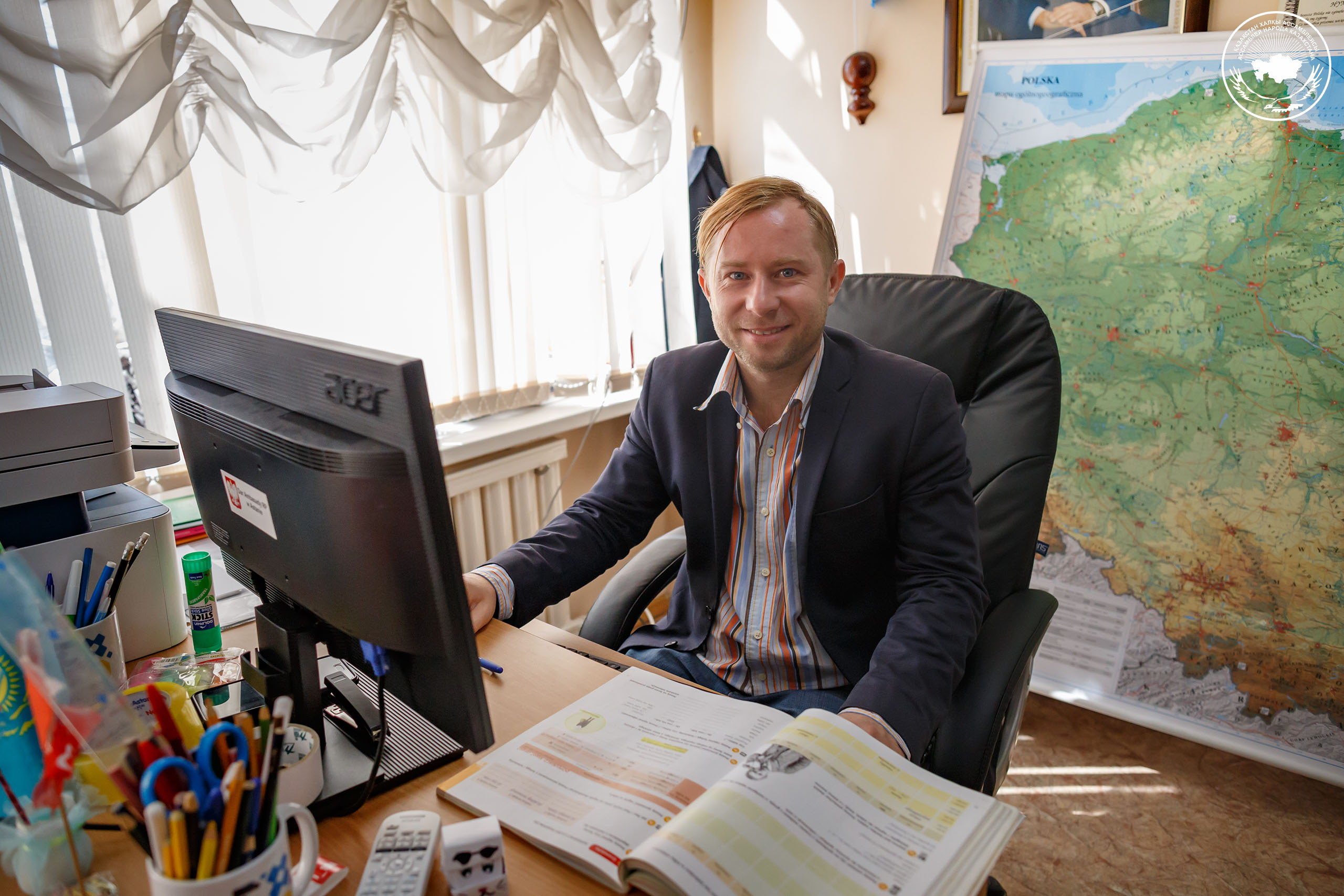 "I teach the second year in Nur-Sultan. Before that, I worked at Pavlodar National Revival School for three years. Sunday school is based on Polish culture. We study not only the native language, but also the history, geography and traditions of Poland. I always try to find interesting facts about Poland and find something common between Polish and Kazakh traditions. I have a very warm attitude towards Kazakhs. I appreciate the Kazakh people, and I like Kazakh traditions very much. I believe that Kazakhs have a rich heritage," Mr. Daniel said. 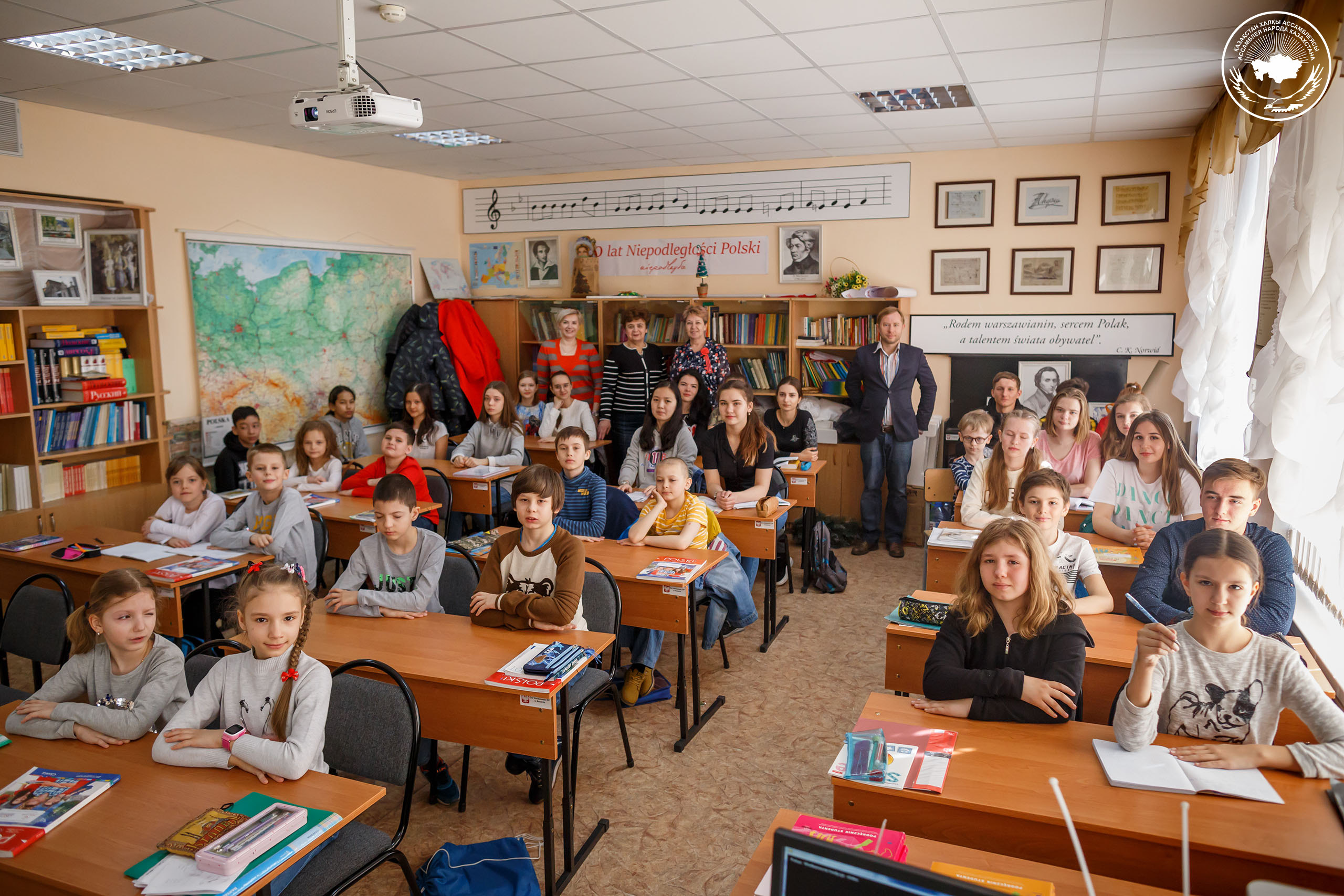 Groups in the school are formed by levels: beginner and intermediate. He also prepares graduates for admission to Polish universities.

Meanwhile, younger students do not hide their admiration for Sunday school and their desire to visit Poland. 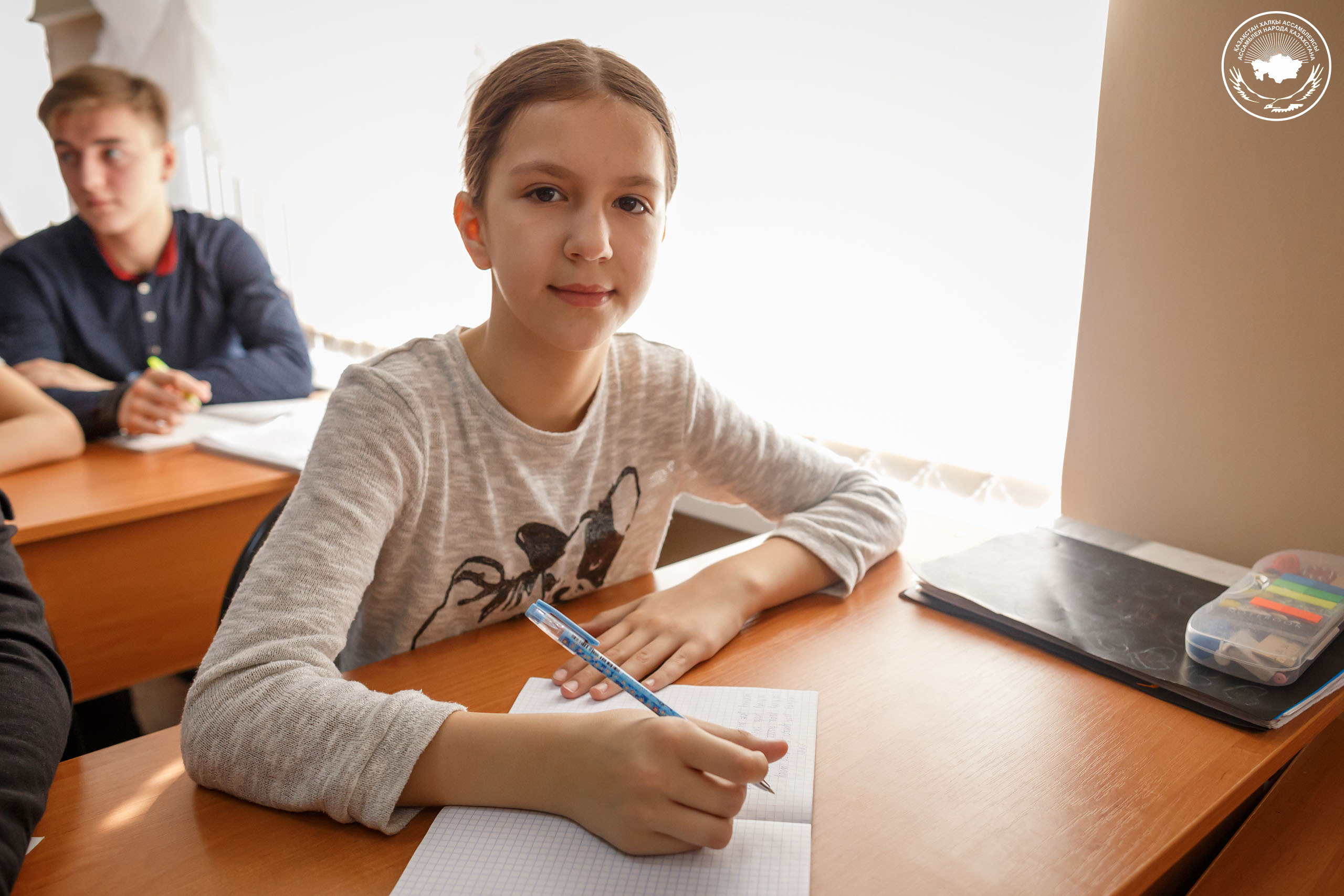 — I go to Sunday school for six months. I study Polish hard because I want to visit Poland. It is very beautiful there. 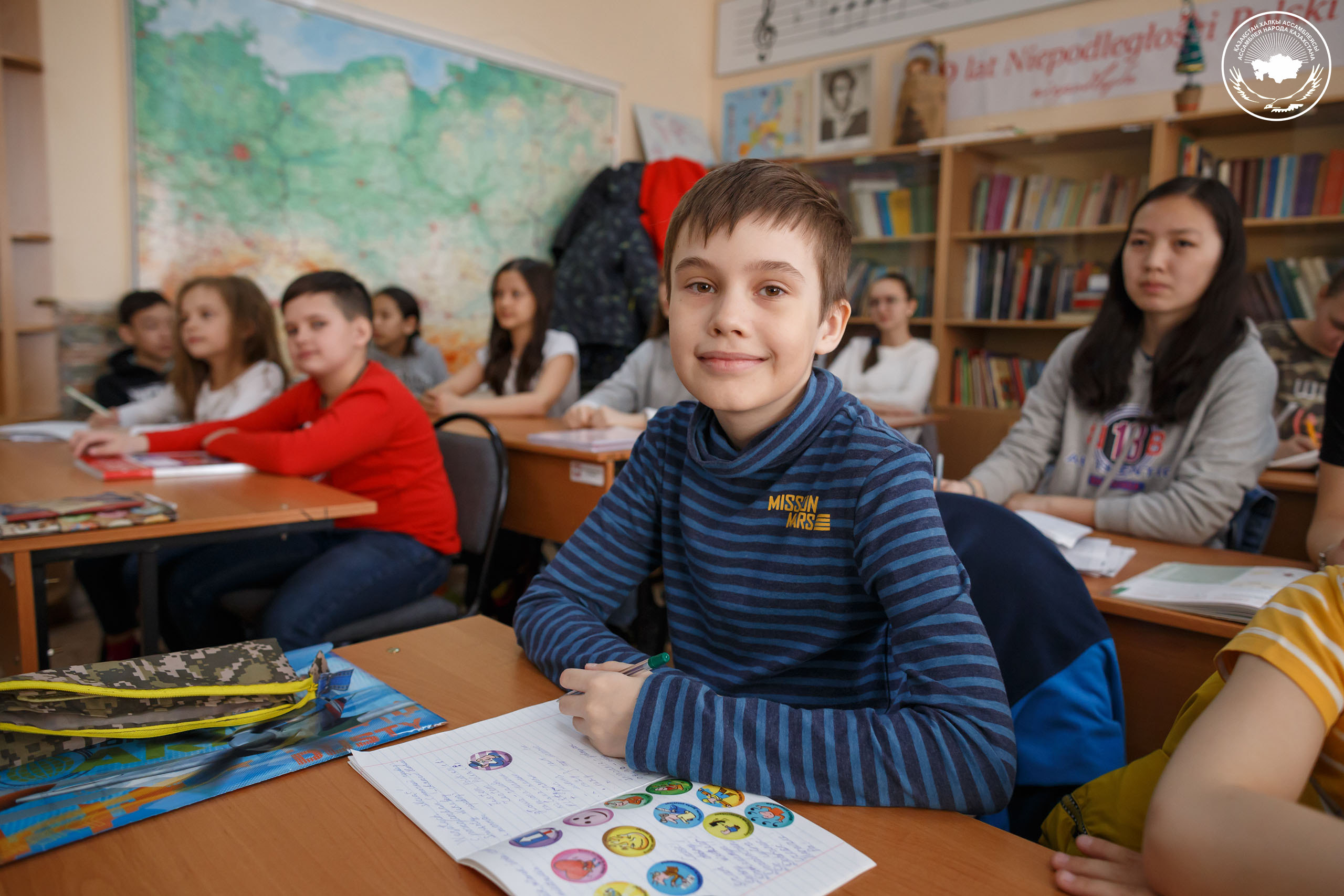 —I take part in the vocal ensemble "Krasnoludki". I like to learn Polish because there are a lot of interesting words there. 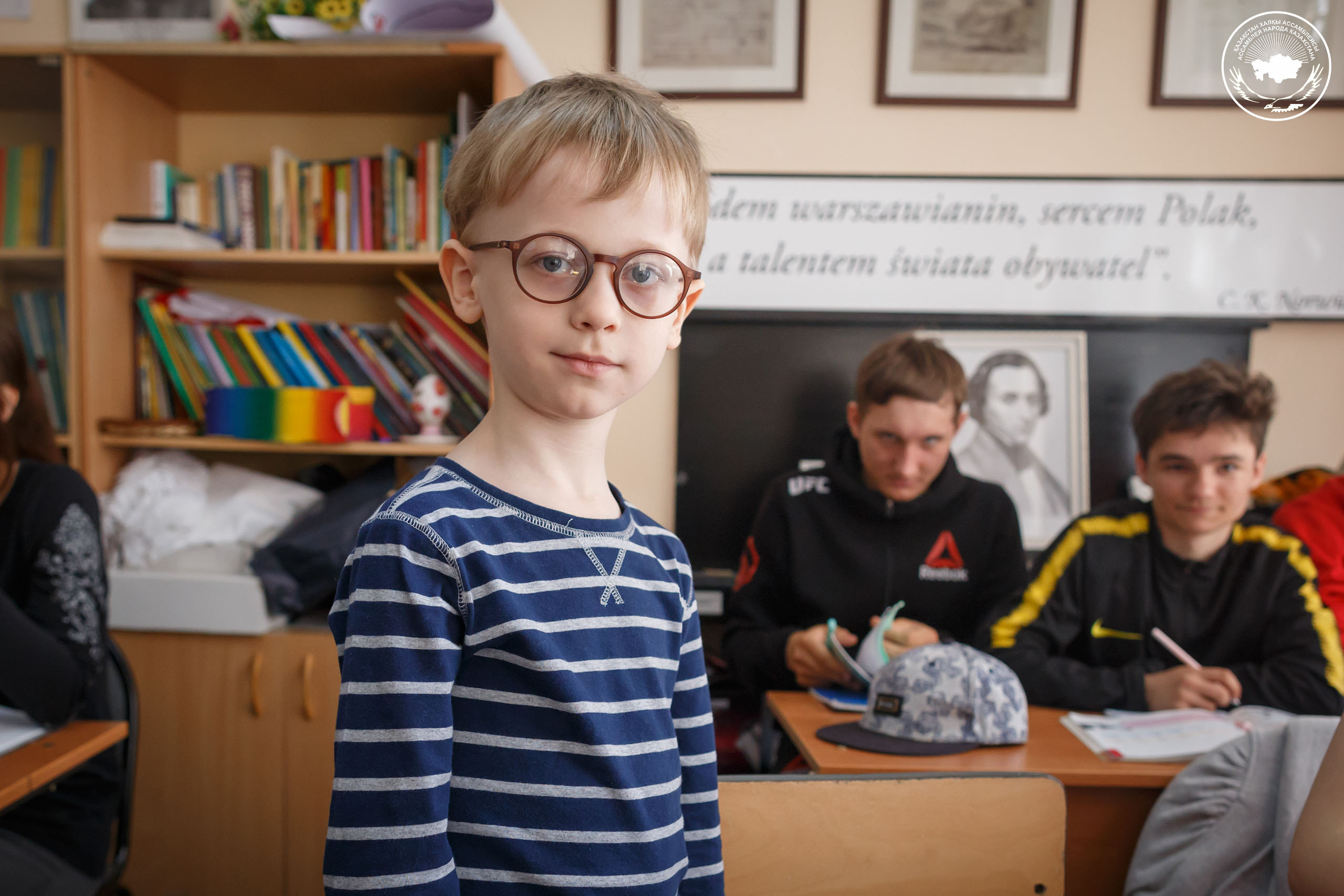 —I've been studying here for two years now, and I really like going to Sunday school. Here you can play, dance. We also learn words, translate texts. Classes with Mr. Daniel are always fun.

Polish ensembles also take an active part in the life of the city. They participate in all city and republican events. According to Anna Chukavina, the head of Kujawyaczek dance ensemble and vocal ensemble, dancers and singers of Sunday school travel to Poland to participate in various contests and international festivals. 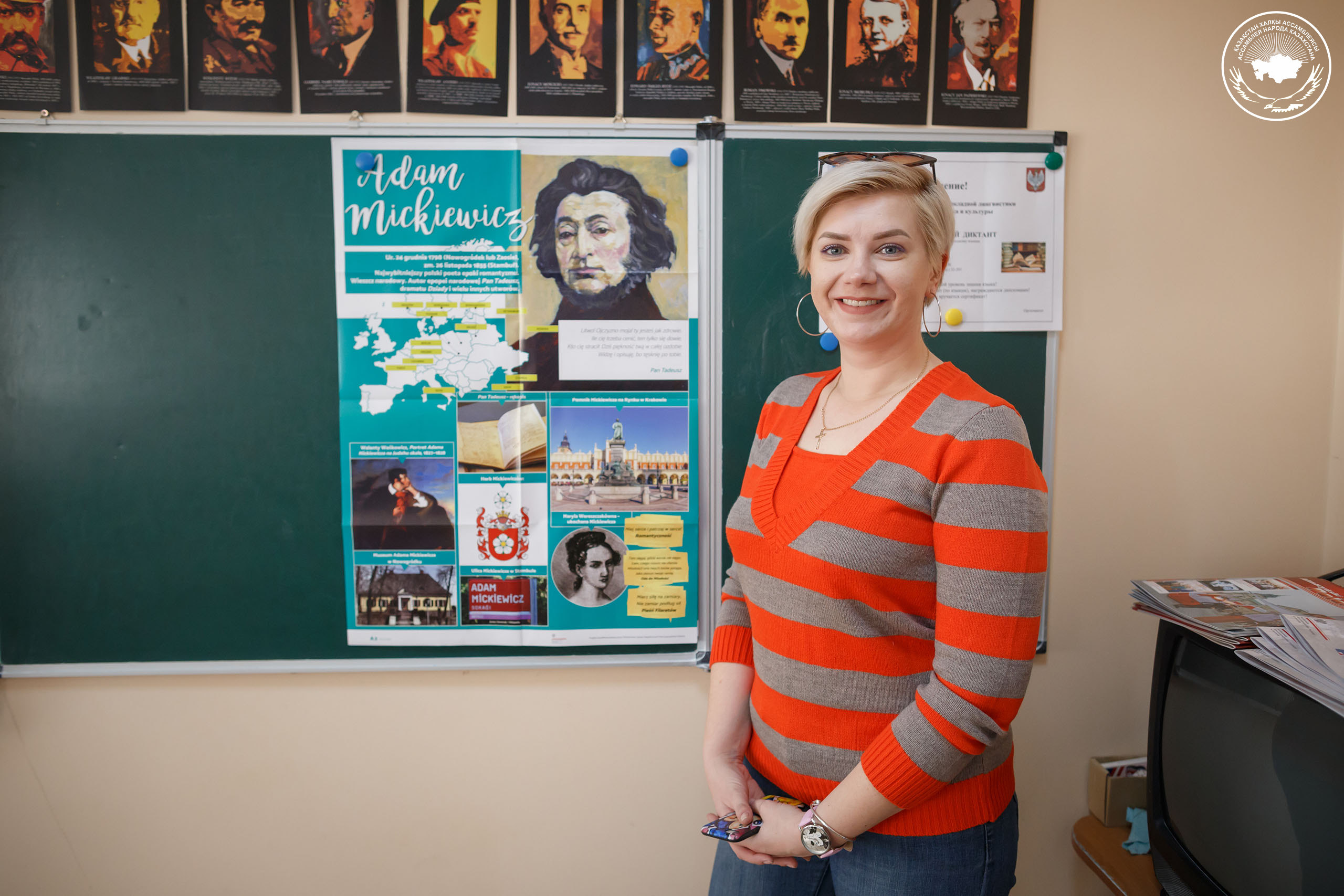 "Our children often win prizes and become laureates. For the 20th anniversary of the association, we prepare various Polish dances such as Polonaise, Krakowiak and Trojak. With the vocal ensemble we also prepare many songs in Polish and Kazakh languages. I have been dancing myself since I was 13 years old, studied in Poland and was a soloist of our ensemble "Stokrotka". In addition, I represented Kazakhstan in Belgium and Poland," said Anna Chukavina. 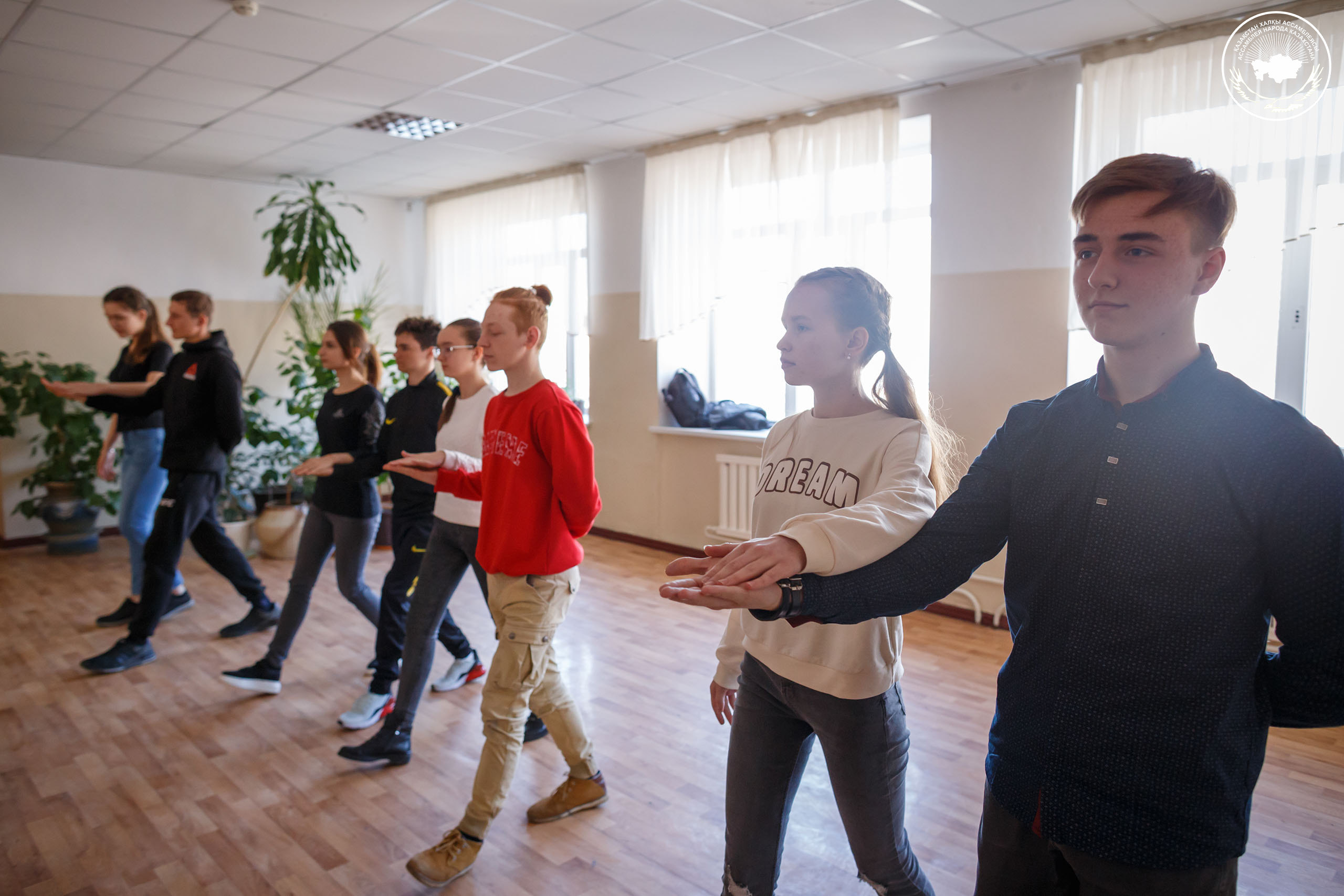 Rehearsal of the Polish dance Polonaise 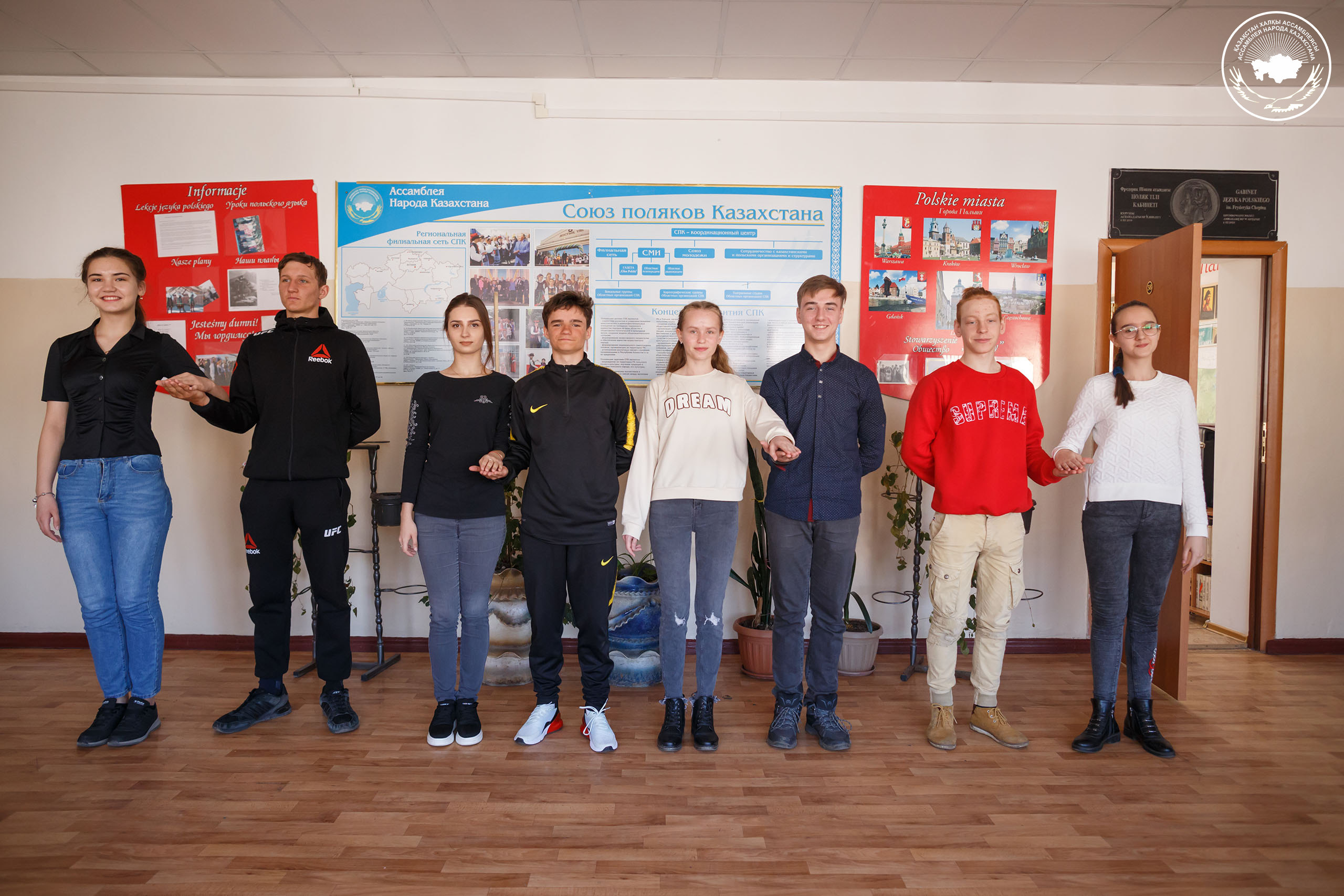 As it was told in Sunday school, after graduating from the 10th grade, children have an opportunity to go to language camps in Poland for a month to learn the Polish language, and on the basis of the results of success - can go on a summer vacation, to live in a Polish family to get acquainted with the life of their brothers in their historical homeland. 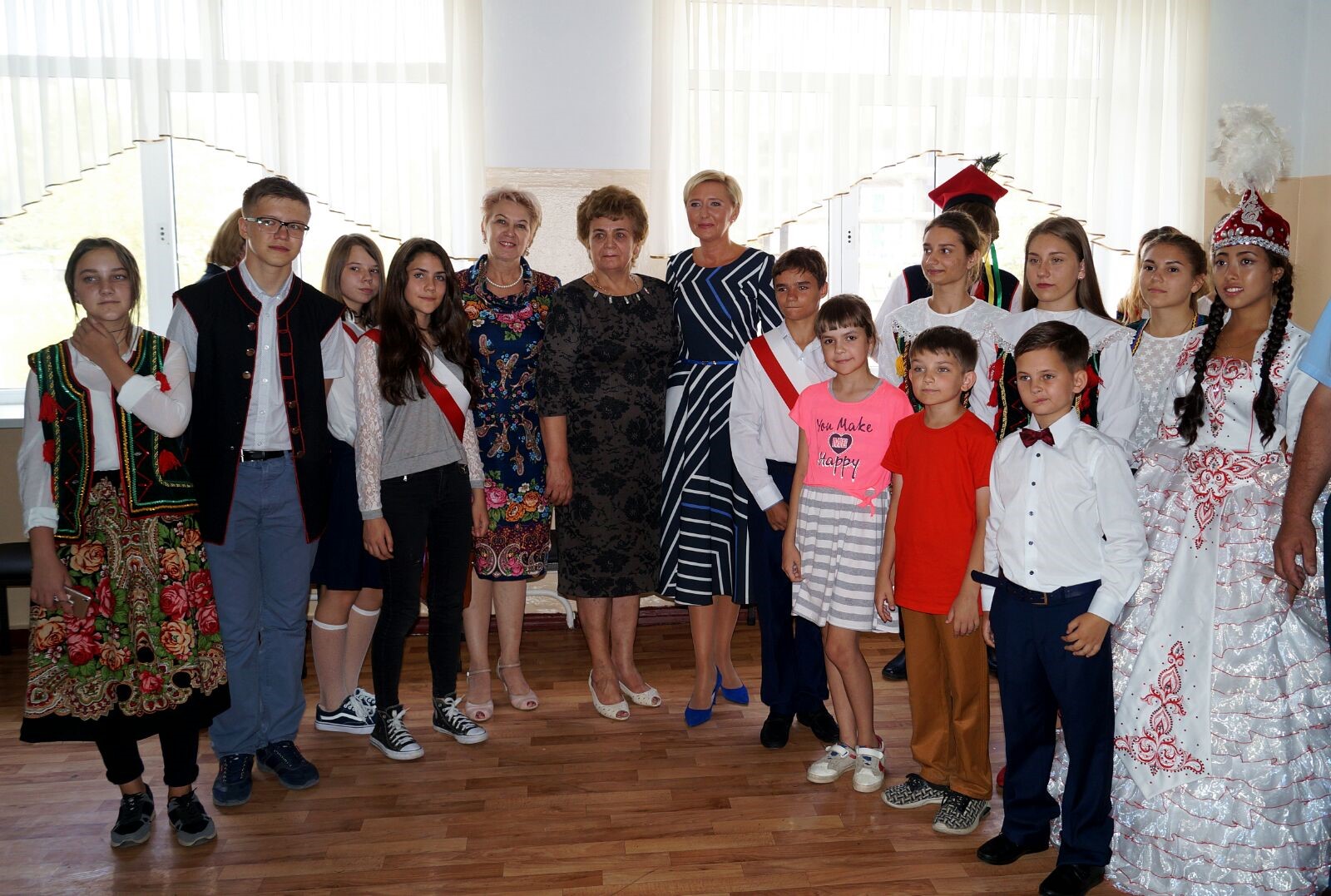 On September 6, 2017, Polish President Andrzej Duda and his wife, Agatha Kornhauser-Duda, arrived in the capital of Kazakhstan on a state visit. The visit of the distinguished guest was timed to coincide with the week of Poland, which took place during the international specialized exhibition "EXPO-2017". 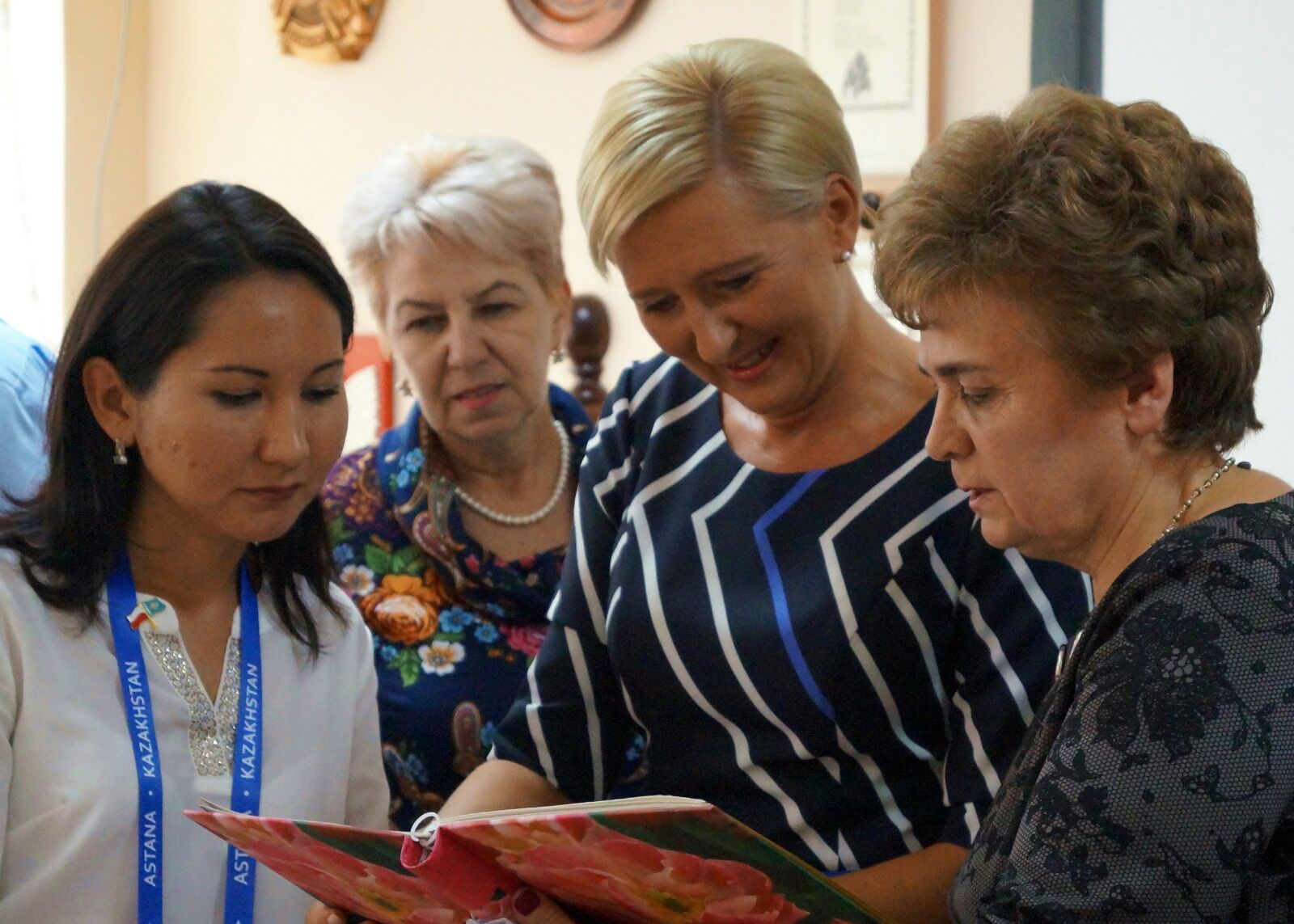 The wife of the President of the Republic of Poland visited Sunday school as part of her visit. The students met the high-ranking guest and the Polish delegation in traditional Polish costumes. During the event, a presentation of the Polish cabinet named after F. Chopin was held, where an interesting conversation with students of the Polish Sunday school was held. Mrs. Agatha Kornhauser-Duda is a teacher by her profession, so she showed genuine interest in the education system of Kazakhstan.

From the moment of formation, the Sunday school is headed by Marina Malinovskaya. As noted by the chairman of the Polish Ethnocultural Center Elena Rogovskaya, Mrs. Malinovskaya is an open and sincere person, an excellent teacher and artistic director. 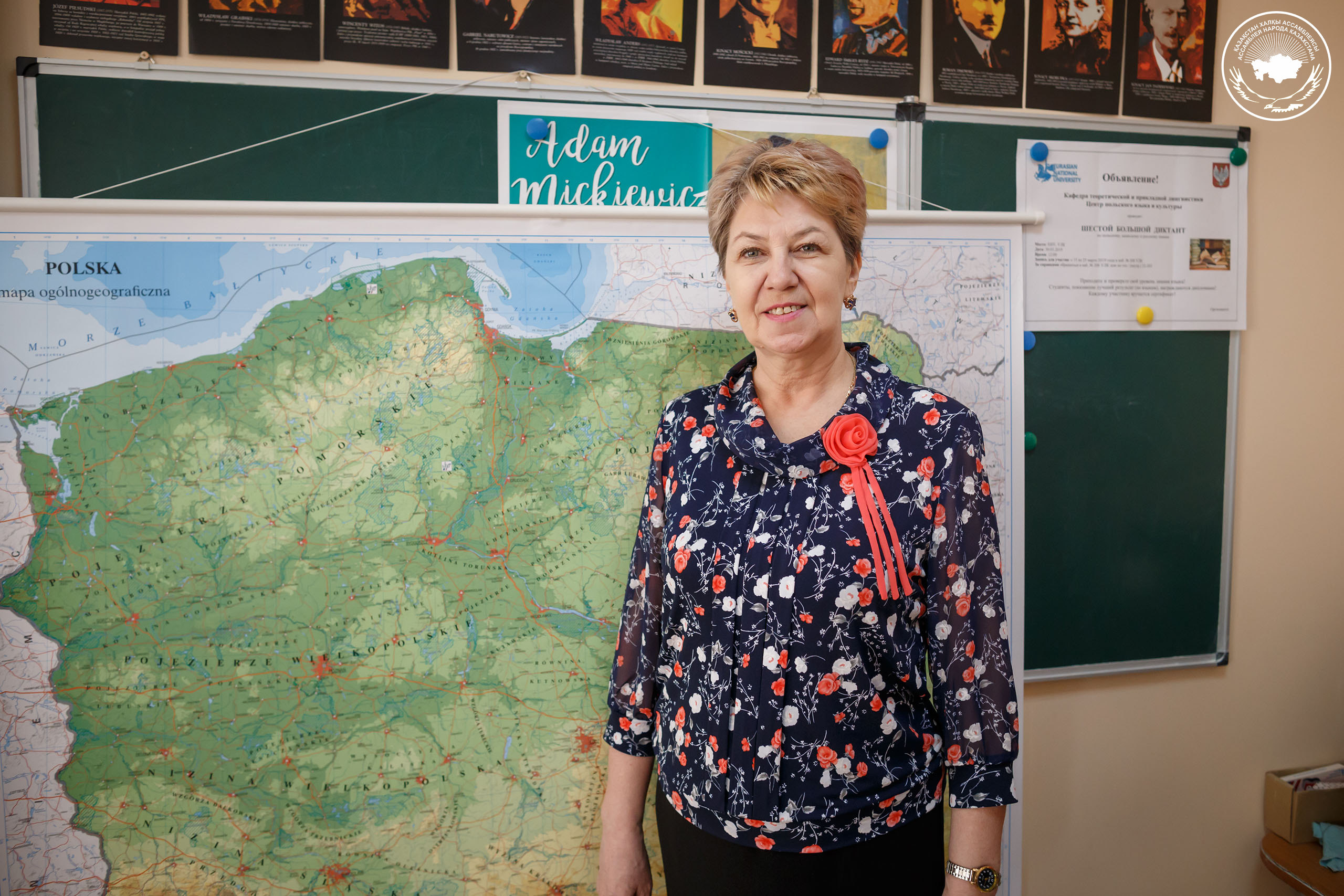 "Marina Vasilievna and I have been working together for so many years, and I would like to express my gratitude to her for the work and patience in taking care of children," said Elena Rogovskaya. 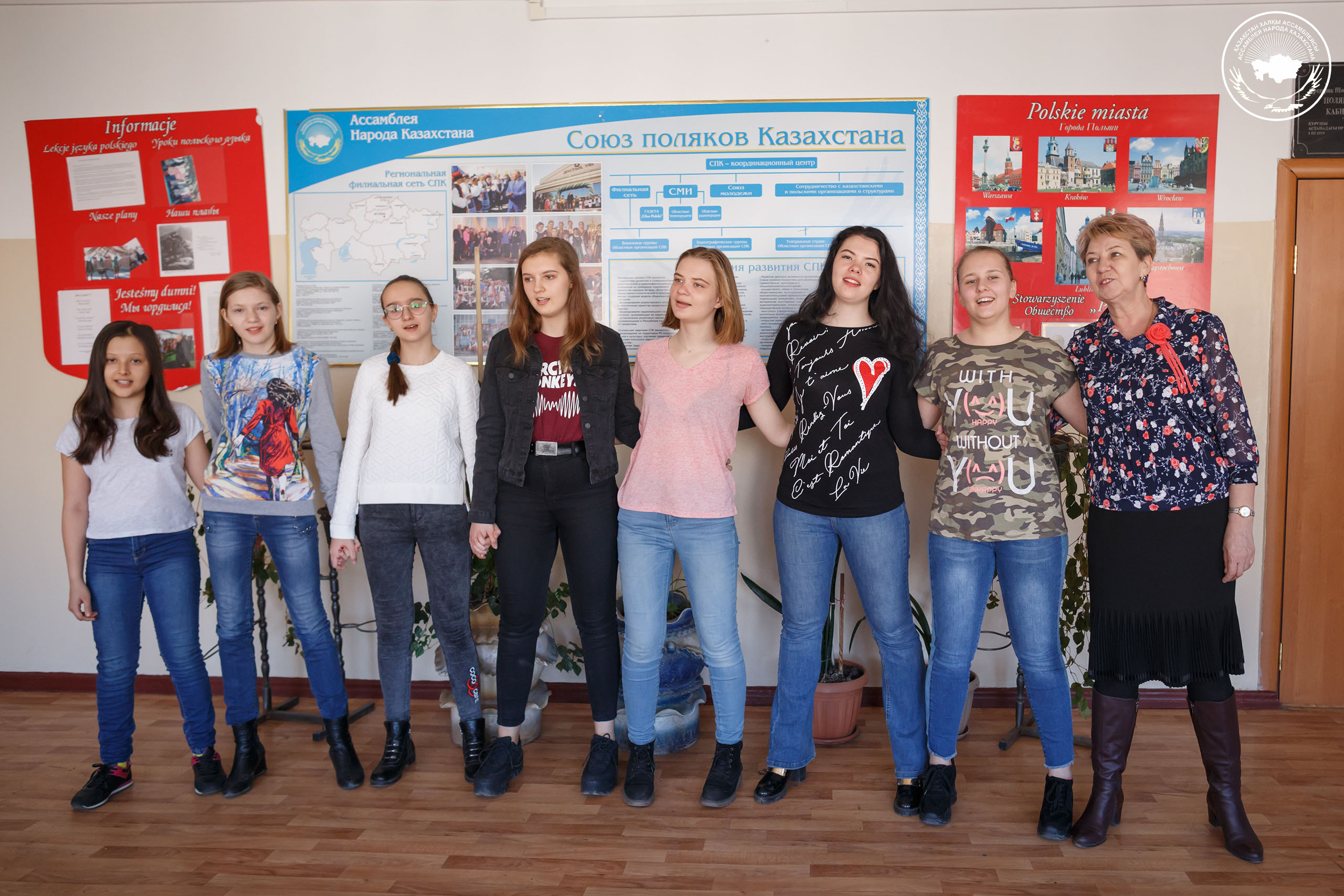 In September of this year, Polacy Association plans to hold a big event in honour of the 20th anniversary of the association. Members of the Assembly of People of Kazakhstan and representatives of the Embassy of Poland in the Republic of Kazakhstan will be invited. 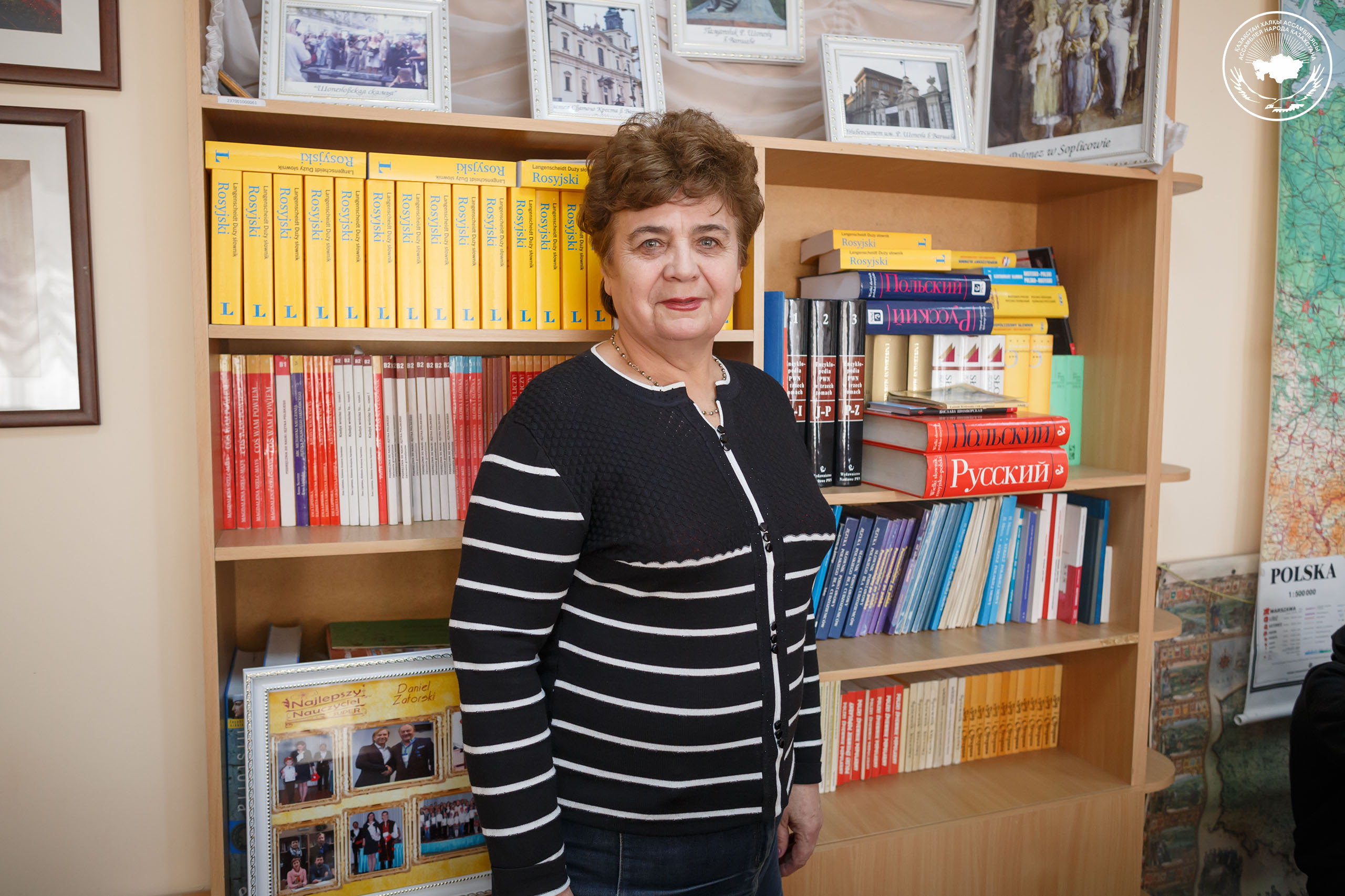 "We are free to learn our native language and culture. This is all possible thanks to the wise policy of our First President Nursultan Nazarbayev. When we go on vacation to Poland with our children, I am often asked to stay in Poland, I say that I am proud that I have two homelands - Kazakhstan and Poland," concluded Elena Rogovskaya, head of Polacy.

Use of materials for publication, commercial use, or distribution requires written or oral permission from the Board of Editors or the author. Hyperlink to Assembly of People of Kazakstan portal is necessary. All rights reserved by the Law RK “On author’s rights and related rights”.  To request authorization email to ank_portal@assembly.kz.