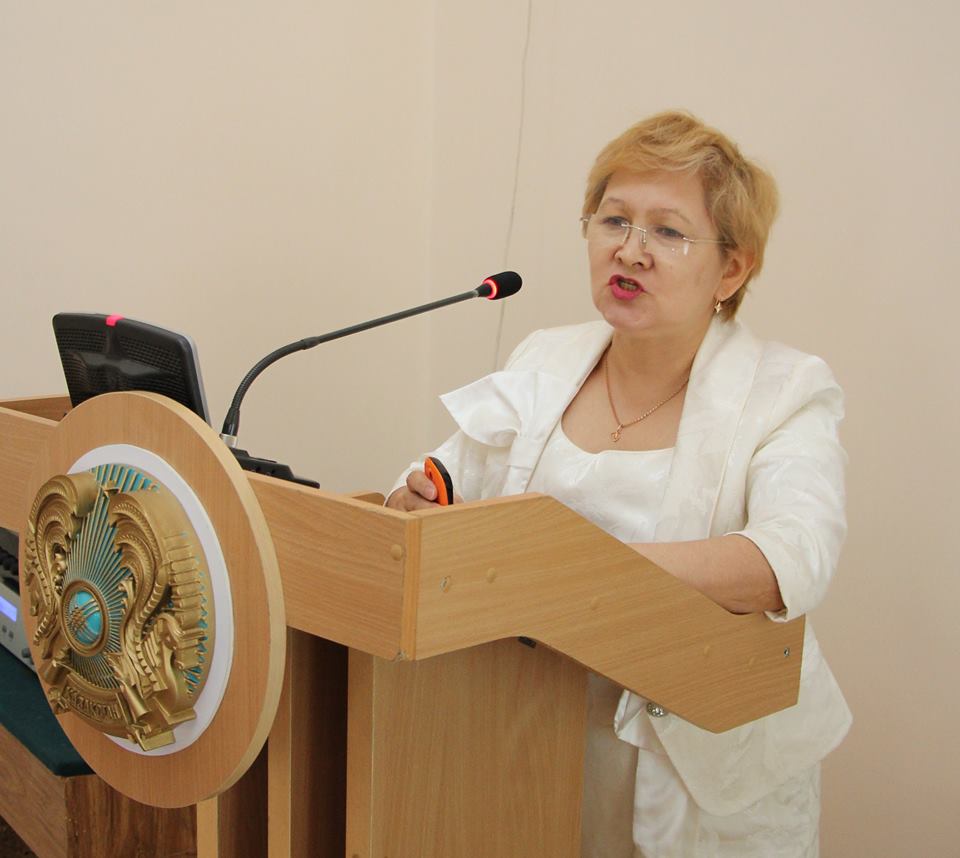 Department of the APK is a public association as a structural unit of PSU and acts as a necessary platform for dialogue, on the basis of which are held scientific and expert councils, activities on the analysis and study of intercultural relations, as well as to strengthen inter-ethnic accord. In interview to our website, Head of APK’s Department at PSU Saule Mamytova has told about objectives that stand before the department. 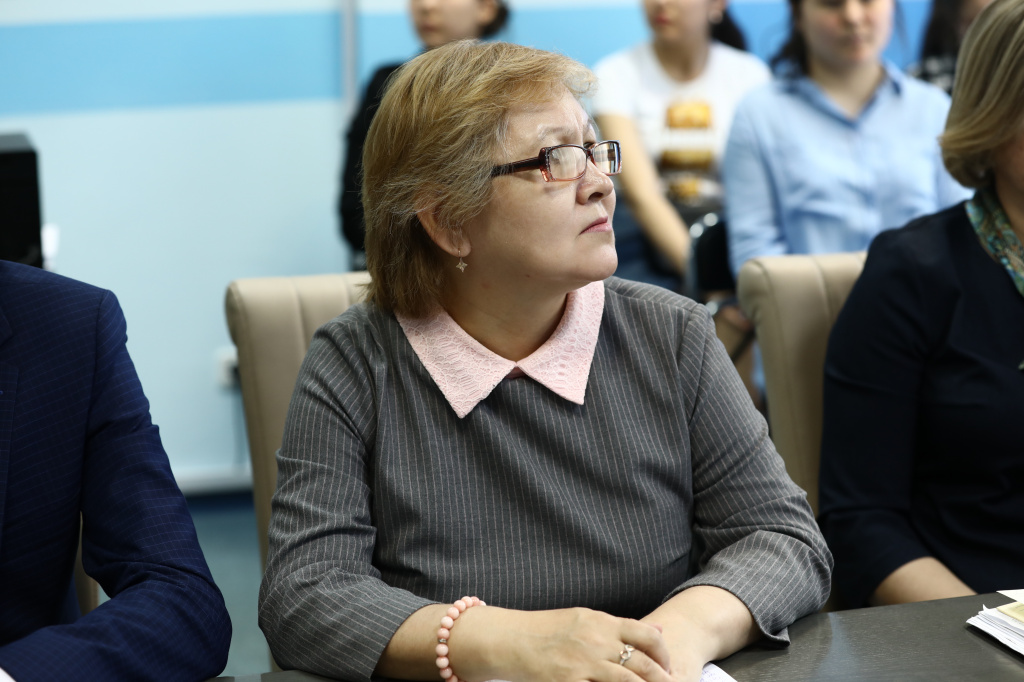 —What is the role of department of the Assembly of People of Kazakhstan for the university and the regional Assembly?

—Department serves as a base for scientific researches of problems in the sphere of interethnic relations for university, working out of methodological bases of formation of interethnic and interconfessional tolerance, popularization of the Kazakhstan model of national unity.

The scientific research of the following topics is carried out at our department:

– History of ethnic business in Kazakhstan in the second half of XIX - beginning of XX century.

–The Kazakhstan model of national consent and unity of Nursultan Nazarbayev in the context of modernization of public consciousness (together with the department of L.N. Gumilyov ENU). 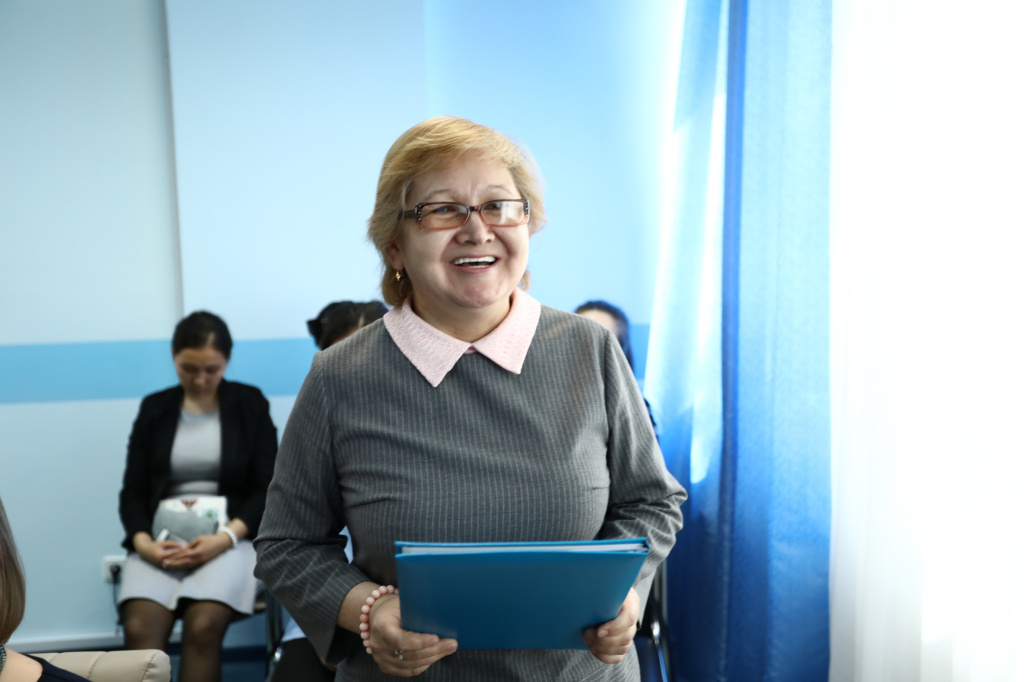 More than 100 scientific works, manuals, monographies, articles are published by results of researches. For the purpose of covering achievements of ethnopolitics and intercultural dialogue in mass-media, materials on history of sociocultural mutual relations of ethnic minorities of Priirtyshye are published on the Assembly’s web-site in regional and republican newspapers and magazines, and also materials of conferences.

The subject "Мangilik Еl" on 3 credits was developed and introduced in academic process for graduates who major in History for realization of results of scientific researches by department of the Assembly of People of Kazakhstan.

It is traditional for the department to participate in the contest for the best scientific project dedicated to the Kazakhstani model of public accord and national unity of Nursultan Nazarbayev. In 2015, I became the winner of the competition with the monograph "History of Ethnic Entrepreneurship in Kazakhstan in the second half of XIX –beginning of XX century", and in 2017, CPS, professor PSU A. Kudabayev took the second place, having presented the project about the role of consolidation of the Kazakh people. 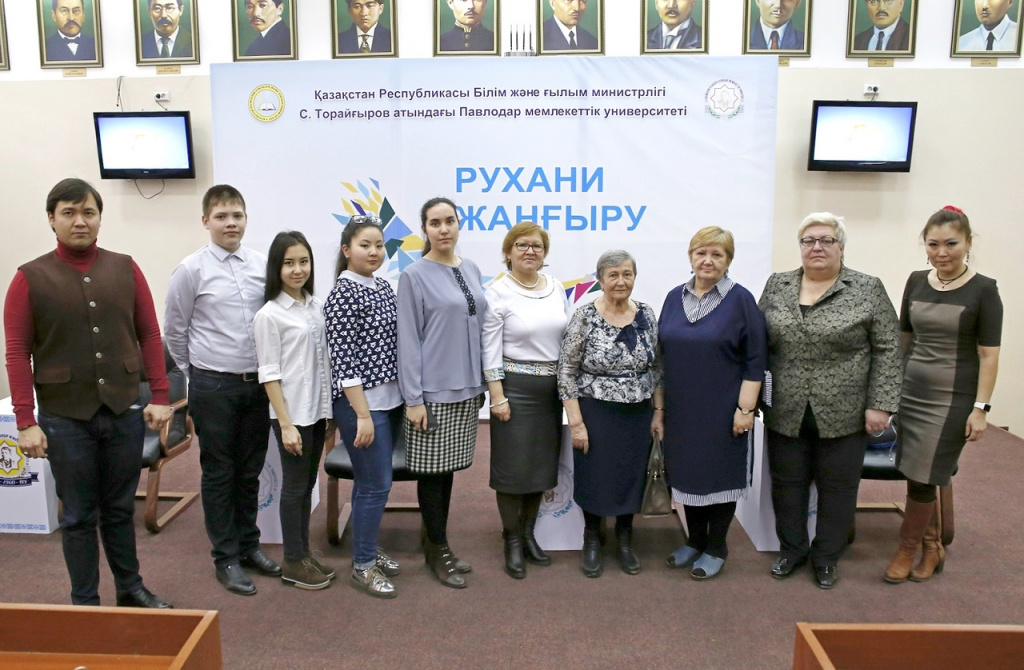 Annually department of APK with the participation of ethno-cultural associations conducts for students the Lessons of history of the Assembly. Speakers explain the values of the national idea "Mangilik El", show the role of the Assembly of People of Kazakhstan in the preservation of peace and accord in society, contribute to the formation and spread of spiritual unity among young people.

The important direction of work of faculty is an explanation of the state national policy within the framework of Addresses of the President of RK, participation in annual republican and regional sessions of APK, the expanded session of Scientific-expert Council, meetings of Association of APK’s departments, organization and carrying out of the seminar-training directed on popularization of consolidating values of idea of spiritual unity among student youth. 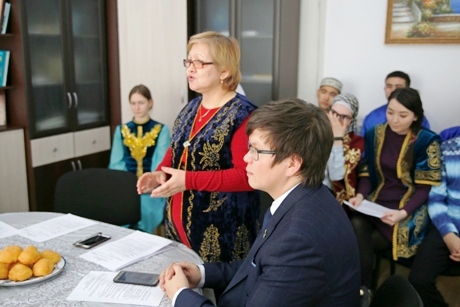 The department takes part in all projects of the state program "Ruhani zhangyru". In 2018-2019, within the limits of the project "Tugan zher" the department has organized and has held round tables on a theme "Nauryz meiramy: history, traditions and customs of the national holiday", "Political reprisals and Pavlodar Priirtyshye", republican scientifically-practical conference "Historical science of Kazakhstan in a context of "Ruhani zhangyru", the international scientific conference "Kazakhs of Novosibirsk region and adjacent territories: a history, culture and interaction", a constituent assembly of Zh. Mardanov Association of local lore experts of Pavlodar region took part in the presentation of exhibitions "Tamyry teren tugan zher" in the regional historical museum named after G.N. Potanin; a series of TV programs "On the streets of Pavlodar"; public hearings on the issue of renaming the streets, an international round table on "Actual problems of studying the history of Pavlodar Priirtyshye: new approaches and discussions in historical study of local lore", etc. Within the framework of the project "Spiritual shrines of Kazakhstan", the department organized an expedition to the sacred places of Pavlodar region "Uly dalanyn qasietti muralary". Within the framework of the project "Switching of Kazakh language to the Latin alphabet" we took part in the start of the language project "Qazaqsha soileu onay!", youth forum "Zhastardy zharkyn bolashakka zhetelitin - til", open dictation on a theme "Astana - beybitshilik besigi", etc. Within the framework of the project "100 New Faces of Kazakhstan" took part in the International youth forum of cross-border cooperation "Birlik-Edinstvo.KZ". This is not the whole list of events under the program "Ruhani zhangyru". Only for two years on the basis of Assembly’s department about 100 events with coverage of more than three thousand student youth have been held.

The department primarily serves as a platform for dialogue for the regional APK. Monthly meetings of students, undergraduates with representatives of ethno-cultural associations take place at department. Round tables, briefings, joint carrying out of national holidays, acquaintance with traditions and ceremonies of the ethnoses living in the region are organized as well.

—What is the main objective of the department?

—The main task of APK’s department is study of actual problems in sphere of interethnic and interconfessional relations, creation of a dialogue platform for APK, popularization of the Kazakhstan model of national unity among student youth. 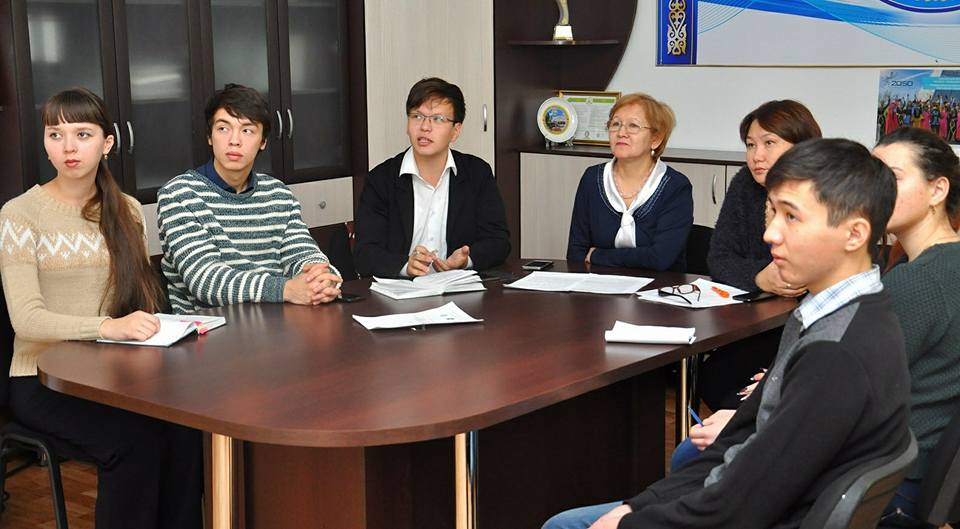 —Could you tell about cooperation of your department with external partners and ethno-cultural associations of your region?

—The department of APK at S. Toraigyrov PSU carries out the work jointly and according to the general plan with APK’s Association of departments (the main department is APK Department of L. Gumilyov ENU), the secretariat, SEG of APK and "Kogamdyk Kelisim" MPI of the region, closely cooperates with ethno-cultural associations, YDC, Internal policy of the region department, and also the republican and foreign research institutes participating in realization of projects on problems of formation of interethnic tolerance, national unity, CS of MES of RK, Ch. Valikhanov IHE of SCS of MES RK, the National Museum of the RK, the Library of Elbasy of RK, the Expert Club "Siberia-Eurasia", the Institute of History of the Siberian Branch of RAS, IAE of SIM - a branch of RANE and PA under the President of RF and others. 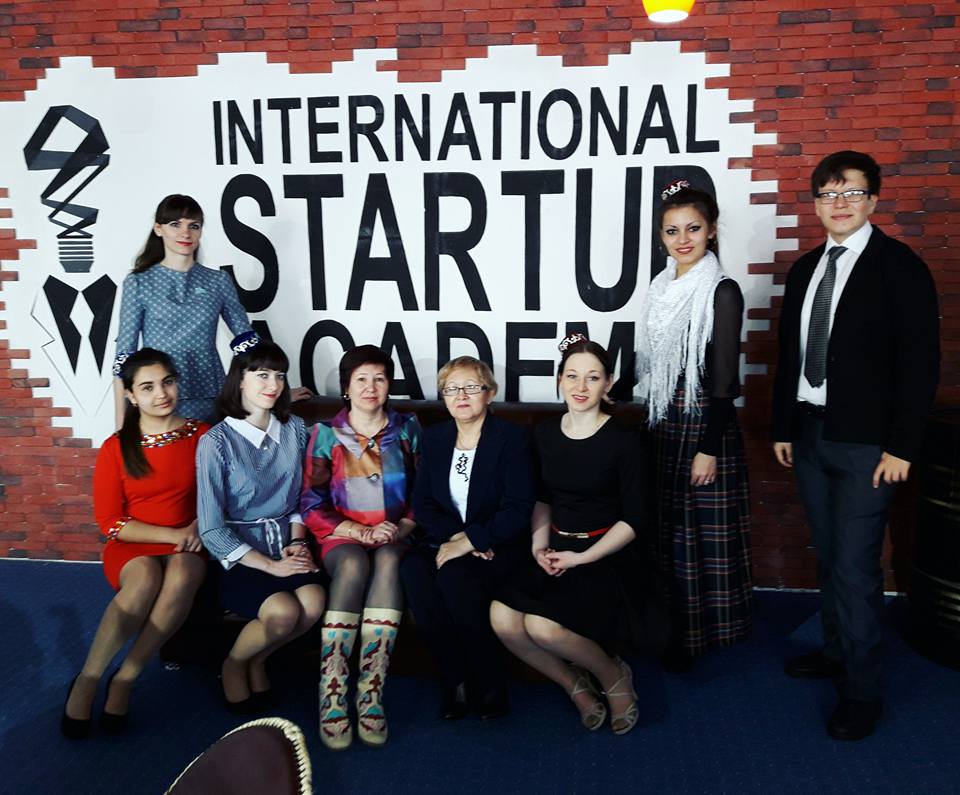 —What tasks do departments of APK face today?

Information technologies cardinally change the worldview of the person and human relations. Use of social networks for work with youth on distribution of idea of national unity and public consent becomes the important tool of activity of APK’s department. In this regard, the work of the information blog of the department in "Facebook", "Instagram", on the website "G-Global" and other, is activated.

In the center of scientific researches there are such relevant themes, as influence of migrations on interethnic relations, development of institute of mediation, a role of digital communication on public consciousness, preservation and development of traditions of continuity, perfection of mechanisms of activity of APK, etc. 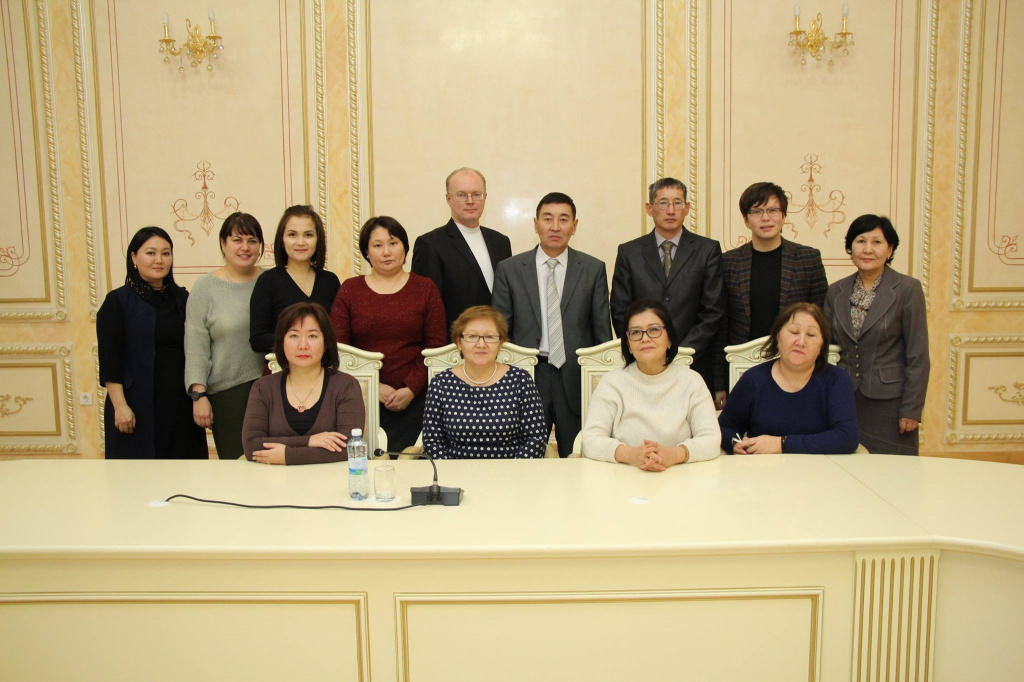 Next year in 2020, APK celebrates its 25th anniversary. Therefore, it is necessary to show the achievements, to emphasize the unique role of the APK in society and to determine new prospects for development. As Chairman of the Assembly Nursultan Nazarbayev said: "We must show what we have to this significant date".

—What does the Assembly mean to you?

—The Assembly is an important dialogue platform for addressing issues related to interethnic and inter-confessional relations, a tool for harmonizing ethnic relations and forming national identity. 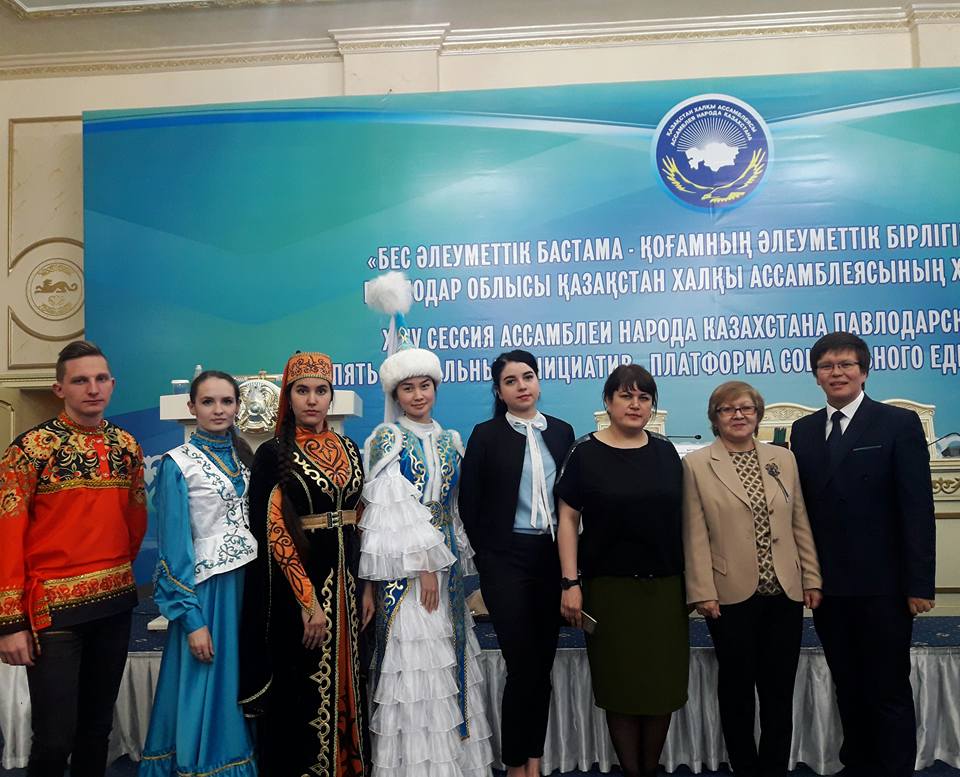 —What is the most valuable thing for you?

—The most valuable for me is the world of good human relations. Regardless of the circumstances, people should remain Humans. Human interests, human life should be above all other interests. You cannot be indifferent to someone else's misfortune, it is important to show mercy and respect for others.