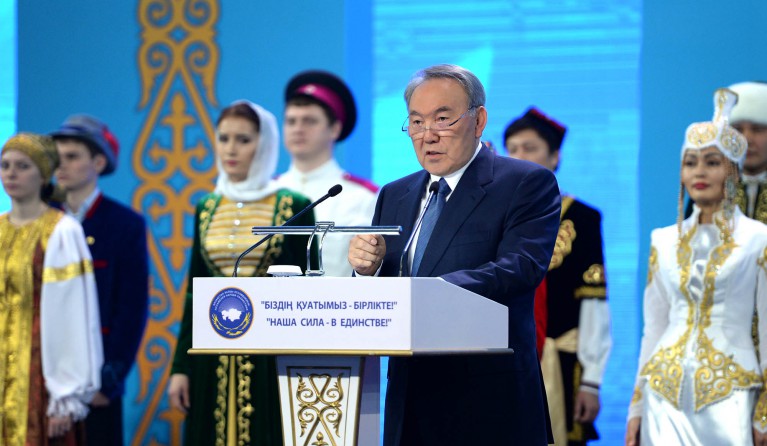 On April 28, 2021, the XXIX session of the Assembly of the People of Kazakhstan on the agenda “30 years of unity, peace and harmony” was held under the chairmanship of the First President of Kazakhstan – President, Chairman of the APK Nursultan Nazarbayev.

The President of the Republic of Kazakhstan Kassym-Jomart Kemeluly Tokayev, head of the administration of the regions – chairmen of the APK in Nur-Sultan, Almaty, Shymkent and regions, heads of central government agencies, deputies of the Parliament of the Republic of Kazakhstan, members of the Assembly of the People of Kazakhstan, chairmen of regional and national ethnocultural associations, political parties, religious associations, NGOs, scientific, creative representatives of the intelligentsia and the media. In total, more than 550 people have taken part at the session.

During the session, the President set specific tasks for the Assembly to further strengthen the social harmony and national unity.

The session was attended by the members of the APK, heads of ethnocultural associations, delegates from the regions, workers' representatives, the representatives of sports, civil society, youth and others.

At the end of the session, the Assembly adopted an Address, that stated: “Since gaining independence 30 years ago, our people, under the full leadership of the First President of Kazakhstan – President Nursultan Nazarbayev, have chosen social harmony and national unity as the main principles of the country's development. This principle has become an unshakable foundation of successful and large-scale socio-economic reforms, continuous democratization of the political system, development of social capital of the nation.

The Assembly of the People of Kazakhstan, established on the initiative of the President, has a special role in strengthening independence, peace and harmony in the country.

The Assembly, that became a nationwide institution, has strengthened the integrity of values ​​and civic principles and ensures an inviolable unity of the people of the country within the framework of common goals and objectives. Due to the activities of the Assembly, the ethnic and cultural diversity of the country has become an important factor in the development and reform.

The address emphasized the historical role of the President in creating a unique Kazakhstani model of peace and harmony.

The Assembly calls for the intensification of work on improving the quality of life of all citizens and strengthening the human potential of the nation, the implementation of national development priorities set by President Kassym-Jomart Tokayev just to build a society and an effective state.

It was said that we firmly believe that by strengthening our independence and unity, we will achieve the successful development and prosperity of our Motherland – the Republic of Kazakhstan!

Therefore, the session of the Assembly of the People of Kazakhstan ended.