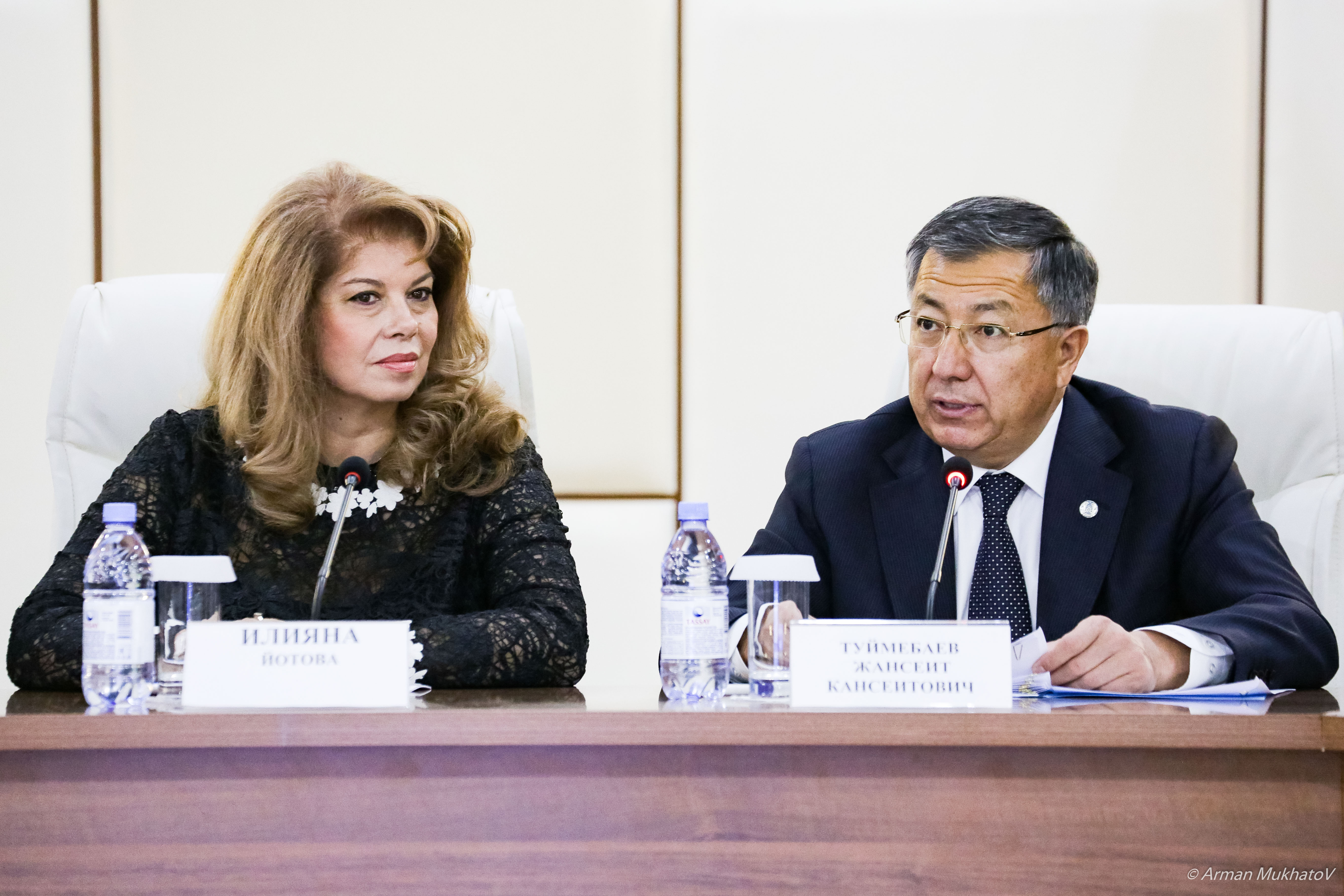 One of the main tasks of the meeting was presentation of Nazarbayev’s Kazakhstan Model of Social Accord and National Unity. Besides, the main goal on the agenda was to discuss the issues of strengthening and expanding bilateral relations between Kazakhstan and Bulgaria in the field of cultural and humanitarian interaction. The Bulgarian delegation arrived with an official visit at the invitation of Bulgarian ethnos living in Kazakhstan. 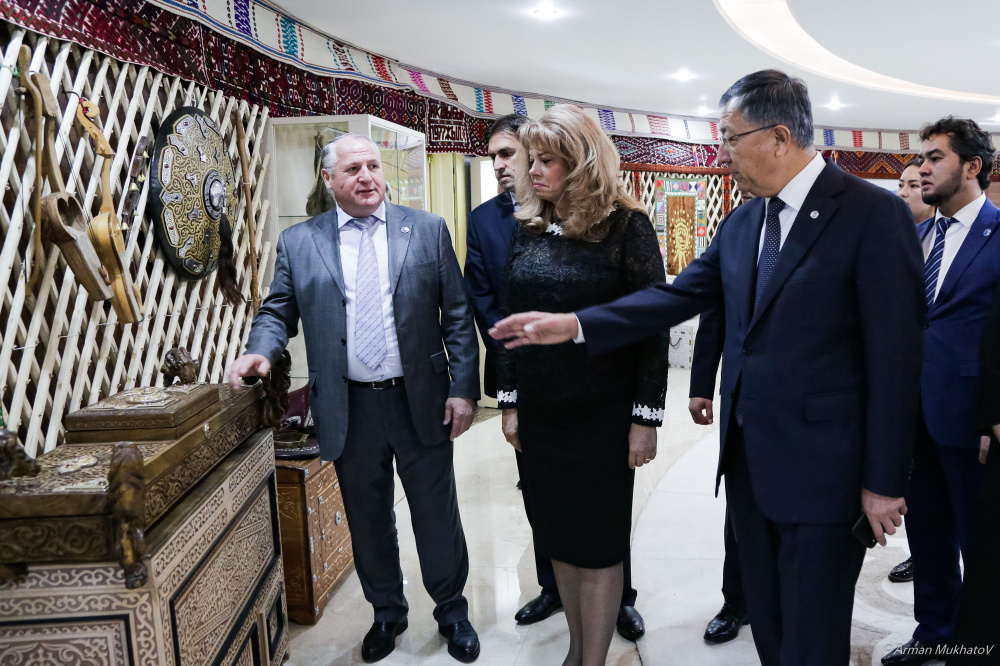 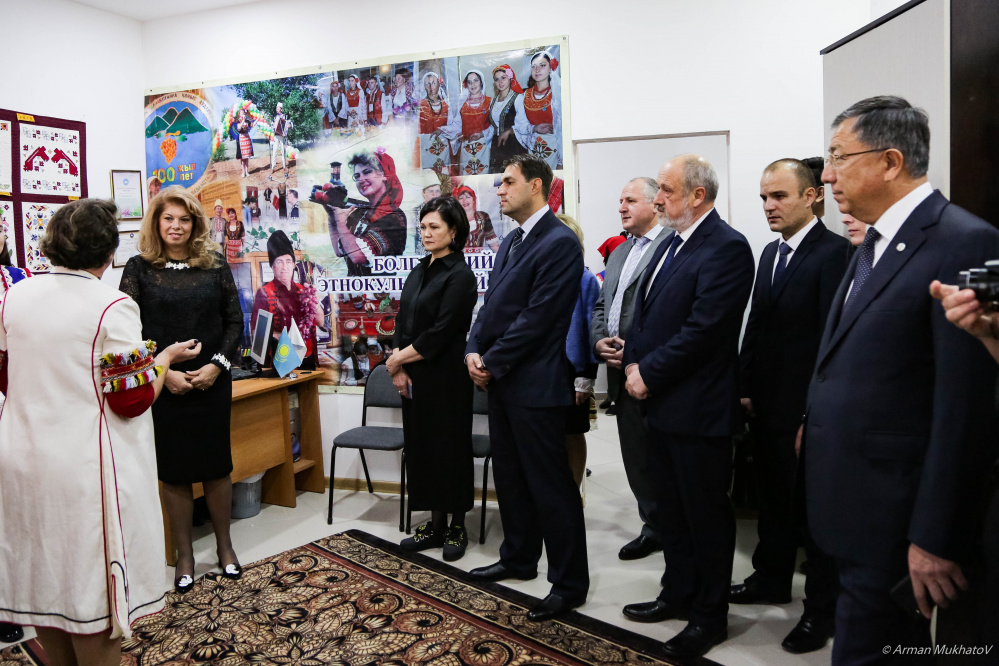 Diplomatic relations between two countries were established in 1992. Since then, political, trade and economic relations between Kazakhstan and Bulgaria have been maintained. Bulgaria supported the chairmanship of the Republic of Kazakhstan in the Organization for Security and Co-operation in Europe in 2010, membership in the World Trade Organization, Kazakhstan's candidacy for non-permanent membership in the Security Council of the United Nations for 2017-2018 and the holding of "EXPO-2017" international exhibition. The turnover between the two countries for January-July of this year amounted to 224.9 million U.S. dollars, and this trend is increasing every year. 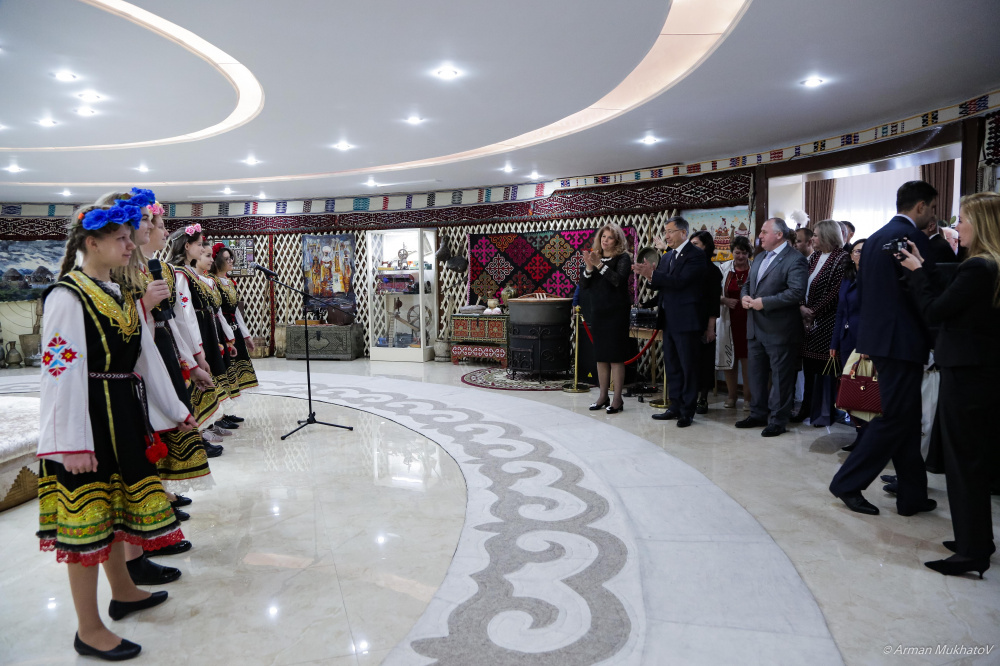 There are many joint ventures in the two countries. As of September 1, 2019, the Republic of Kazakhstan has registered 91 enterprises with Bulgarian capital, including wholesale and retail trade, construction, professional, scientific and technical activities, administrative and auxiliary services, manufacturing, transport and warehousing, real estate operations, water supply, information and communication, accommodation and catering, mining, art. In turn, more than 263 trade missions with Kazakh participation are registered in Bulgaria. The largest is Rompetrol Bulgaria, which has a network of petrol stations throughout the country.

Vice President of Bulgaria started her career with the National Television of Bulgaria. During the meeting, Iliana Yotova noted the hospitality of Kazakhstan and expressed gratitude. "I would like to thank you for the wonderful opportunity you gave us. It is a great honor for me to get acquainted with the model of social accord and national unity, which deserves respect and attention of the whole world. I am very grateful that your country has created all the conditions for the young generation to have an opportunity to study their culture, history and native language," said Iliana Yotova. In addition, the Vice President said that before coming to the Republic of Kazakhstan, she carefully studied the activities of the Assembly.

During the discussion of the issues of deepening bilateral relations between the countries, Zhanseit Tuimebayev spoke about opportunities and activities of Bulgarian cultural centers in the country, the work of the Assembly of People of Kazakhstan, as a unique institution of interethnic accord. At the same time, Deputy Chairman of the Assembly noted the prospects of cooperation in the field of culture, art and sports. 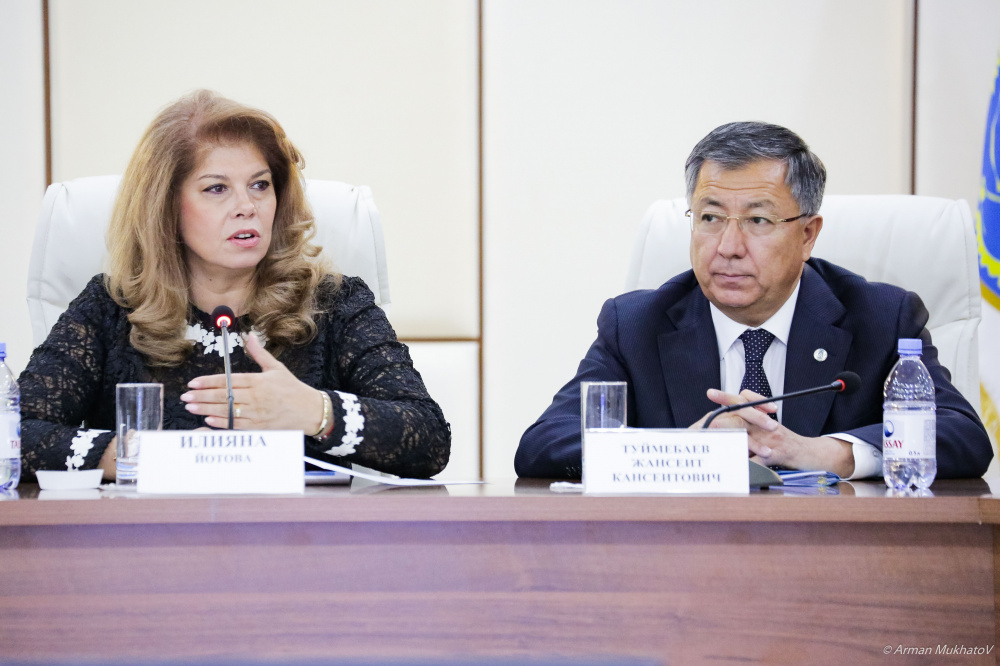 Zhanseit Tuimebayev, Deputy Chairman - Head of the Assembly of People of Kazakhstan’s Secretariat:

- It is necessary to organize joint Days of Culture, film presentations and exhibitions. Specialists from Bulgaria make a significant contribution to the development of education and sports in Kazakhstan. Successful cooperation between higher educational institutions of our countries is realized. About 100 students from Kazakhstan study in Bulgarian universities. We are grateful to the Bulgarian party for opening offices to study Kazakh language, literature and culture at Sofia University, Sofia Capital Central Library and Technical University of Sofia as well. We are ready to cooperate with you and continue to provide all necessary conditions for the development of culture, language and traditions of the Bulgarian ethnos.

We would like to remind you that Bulgarian cultural centers are registered in Nur-Sultan, Pavlodar, Atyrau, Aktobe and Karaganda regions. There are 4 representatives of Bulgarian ethnocultural center in the Assembly. 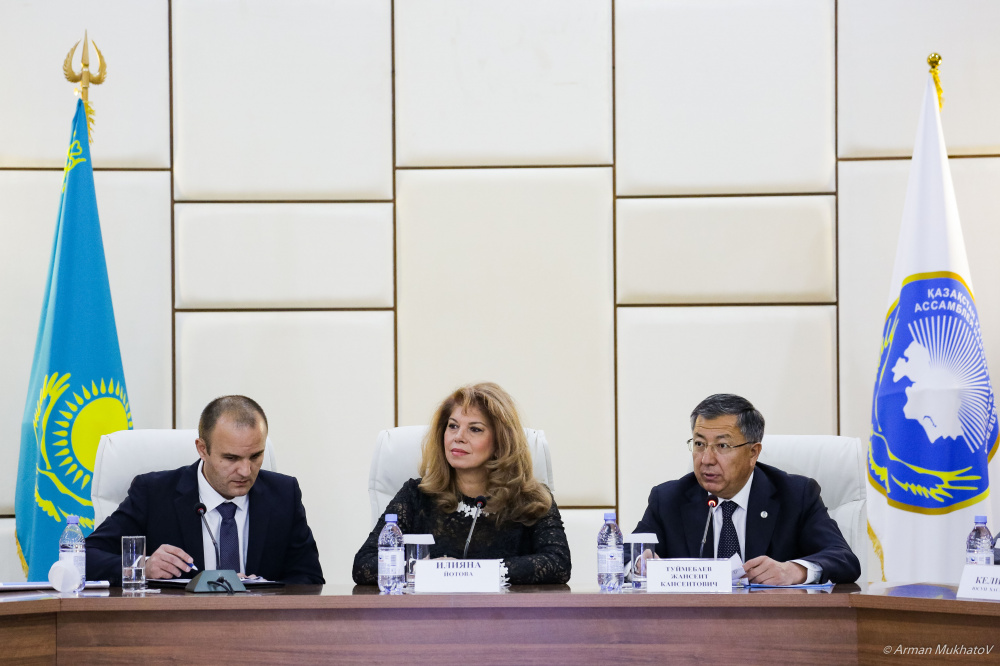 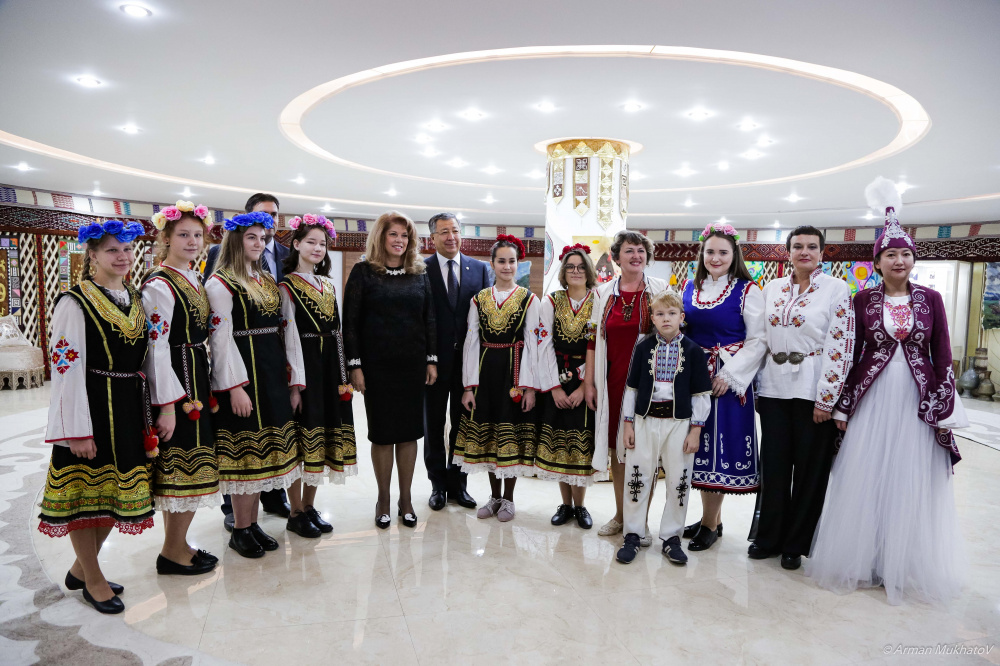 To date, there are about 4.5 thousand ethnic Bulgarians living in Kazakhstan. The first Bulgarian expatriates were marked in the twentieth century during the Stolypin reforms. The second wave of resettlement of Bulgarians occurred during the Second World War during the period of deportation. Today, the majority of the Bulgarian ethnos lives in Aktobe region. There is also the village of Bolgarka, which is mostly inhabited by Bulgarians. The village was founded in 1908. Relations between Bulgarians and Kazakhs began to improve since those times. Today, many mixed families are registered.