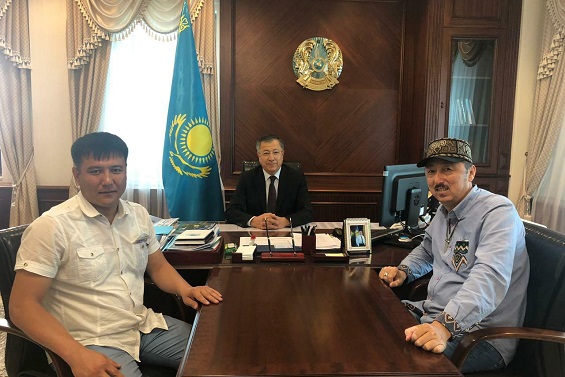 Deputy Chairman - Head of Secretariat of the Assembly of People of Kazakhstan of Executive Office of the President of the Republic of Kazakhstan Zhanseit Tuimebayev met with the Director of "Ontustik film" KSU, chief director of the film studio "Sak", famous animator Batyrkhan Daurenbekov and chief administrator of the creative team Nurbakyt Bayysbek.

During the conversation, Deputy Head of APK focused on the work of the Assembly on strengthening political stability and interethnic relations in society, and talked about the role of the national cinema in the formation of patriotism and the national spirit.

In addition, he noted the need to increase projects aimed at reviving the ancient history and spiritual values, promoting traditions and customs, familiarizing young people with work, increasing national unity.

It should be reminded that in the period from 2017 to 2018, the studio "Sak" on the basis of the idea and order for that period of regional mayor Zhanseit Tuimebayev implemented several historical works and animated films in the article "Course Towards the Future: Ruhani Zhangyru".